Shooting for the Stars: A Gil Malloy Novel (The Gil Malloy Series #3) (Paperback) 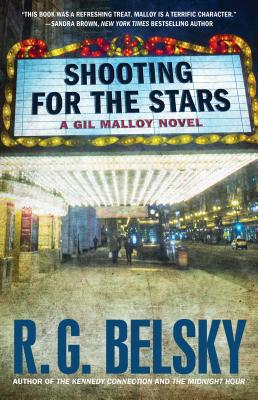 This is book number 3 in the The Gil Malloy Series series.

Some thirty years ago, movie star Laura Marlowe was shot to death by a crazed fan in New York City, who then killed himself. The police ruled it a murder-suicide, the case was closed, and the beloved starlet faded away into history. But when New York Daily News reporter Gil Malloy re-investigates Marlowe’s death, long-buried secrets emerge and he begins to uncover the trail of a new serial killer. And more people are dying. Now, before he can solve the current crimes, Gil must find out what really happened to Laura Marlowe all those years ago.

Delving deep into the newsroom as we know it today—sensationalized, digitized, and ruled by social media—R. G. Belsky has crafted another expert thriller that shines with his shrewd and engaging style.

"Smart, juicy sequel to 2014's The Kennedy Connection....Belsky keeps this highly satisfying mysery zipping along right up to the final twist."
— Publishers Weekly

“What shines brightest here is Belsky’s talent for keeping the pace steady and fast so that every round of inquiries produces more satisfyingly tawdry revelations.”
— Kirkus

“I was thoroughly hooked by Gil Malloy’s glibness and the intricate plot. I read it in two sittings.”
— Sandra Brown, New York Times bestselling author

"Readers are taken on a personal ride through the investigative process of journalism while also displaying his obvious contempt for the ‘new media’ that places more value on electronic hits than it does on The Story. I have an opening on my power rotation and am seriously considering elevating Belsky.” Great story that I could’ve read in a single sitting. Malloy may be a deeply flawed character, but that’s part of what makes this a highly readable book."
— Men Reading Books

Shooting for the Stars takes readers on a wild ride from the high rises of Manhattan's ravenous media machine to the seedy underbelly of 1980s Hollywood and back. Veteran reporter Belsky has written a fast-paced, fun read with twists around every corner and an ending you will never see coming.”
— Julia Dahl, author of Invisible City

This book is journalism at its best . . . . There is not a dull moment throughout this book as it is laden with mystery and suspense.
— NightOwlReviews.com

"Belsky scores a direct hit...Malloy is perhaps more akin to Mike Hammer, James Rockford, or Jake Gittes with a nose for news and a knack for getting in trouble. You just don’t see many reporters of his ilk anymore."
— G. Robert Frazier, author and founder of AdventuresInWriting.com