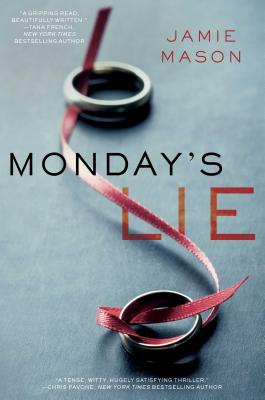 From the acclaimed author of the “ripping good” (The New York Times) debut novel Three Graves Full comes a new thriller about a woman who digs into her unconventional past to confirm what she suspects: her husband isn't what she thought he was.

Dee Aldrich rebelled against her off-center upbringing when she married the most conventional man she could imagine: Patrick, her college sweetheart. But now, years later, her marriage is falling apart and she’s starting to believe that her husband has his eye on a new life...a life without her, one way or another.

Haunted by memories of her late mother Annette, a former covert operations asset, Dee reaches back into her childhood to resurrect her mother’s lessons and the “spy games” they played together, in which Dee learned memory tricks and, most importantly, how and when to lie. But just as she begins determining the course of the future, she makes a discovery that will change her life: her mother left her a lot of money and her own husband seems to know more about it than Dee does. Now, before it’s too late, she must investigate her suspicions and untangle conspiracy from coincidence, using her mother’s advice to steer her through the blind spots. The trick, in the end, will be in deciding if a “normal life” is really what she wants at all.

With pulse-pounding prose and atmospheric settings, Monday’s Lie is a thriller that delivers more of the “Hitchcockian menace” (Peter Straub) that made Three Graves Full a critical hit. For fans of the Coen brothers or Gillian Flynn, this is a book you won’t want to miss.

Jamie Mason was born in Oklahoma City and grew up in Washington, DC. She’s most often reading and writing, but in the life left over, she enjoys films, Formula 1 racing, football, traveling, and, conversely, staying at home. Jamie lives with her husband and two daughters in the mountains of western North Carolina. She is the author of Three Graves Full, Monday’s Lie, and The Hidden Things.

“Let's take Monday's Lie for what it is: one of the best thrillers you'll read, more flip than James Cain, yet full of much more food for thought than Alexander McCall Smith.”
— Asheville Citizen-Times

“A pulse-pounding climax… the depth of Mason’s characters and the complexity of their relationships can stand with any.”
— Booklist

“Calling Jamie Mason's books 'psychological thrillers' is like calling Fargo a detective movie—it's true, but it doesn't give you anything like the whole picture. They're much more. This is a thriller, all right, and one full of merciless twists—but it's also an edgy dissection of a marriage turned horribly sour, and a powerful exploration of the charged relationship between a mother with too many secrets and too much capacity for ruthlessness, and a daughter doing everything in her power to have neither. It's a gripping read, beautifully written, dotted with moments of black comedy and pulsing with an undercurrent of deep sadness.”
— Tana French, New York Times bestselling author of THE SECRET PLACE

"Monday's Lie is an elegant and compact literary thriller. Mason's use of language is cunning and expressive, and her heroine's interior drama is as intriguing as the plot itself."
— Knoxville News Sentinel

"Portraying characters so well and so thoroughly, examining and explaining their motives even for murder, requires a level of skill that is rare, marking this as an astonishingly accomplished debut and Mason as a writer to watch very closely."
— Booklist, Starred Review (A Top Ten Crime Novel of 2013)

"Filled with biting wit and great prose style, Three Graves Full by newcomer Jamie Mason may be the debut of the year."
— Bookspan (A Top New Book of 2013)

"Mason's prose is at times as lovely as poetry, and wry humor deftly offsets her grim tale to devastating effect. This tale has more twists than a corkscrew and you'll find yourself surprised at nearly every turn... Mason has written a quirky and downright thrilling treat that is not to be missed."
— Library Journal, Starred Review

"Three Graves Full is an astonishing debut novel, smart and stylish and wonderfully light on its feet. Jamie Mason writes crisp, surprising sentences, and this aura of wit infuses her lovely plot with an absolutely Hitchcockian menace. I think she was probably born to be a writer, and I eagerly look forward to whatever she will do next."
— Peter Straub, New York Times bestselling author

"Mason’s quirky debut novel deftly weaves dark humor into a plot that’s as complicated as a jigsaw puzzle but more fun to put together...Mason’s written a dandy of a first outing with not a single boring moment."
— Kirkus

"Deep and dark, yet funny, a refreshing combination that snags the reader like a grappling hook."
— New York Journal of Books

"Not simply a great debut novel or a noble first effort; it is purely a wonderful book from beginning to end....Pitch-perfect pacing, unforgettable descriptions, and quirky but realistic characters abound from page to page. It is a perfect one-sit read, not because there aren’t places where you can comfortably stop, but because you simply will want to keep forging ahead...Take the hint and read it."
— Joe Hartlaub