This Land: An American Portrait (Hardcover) 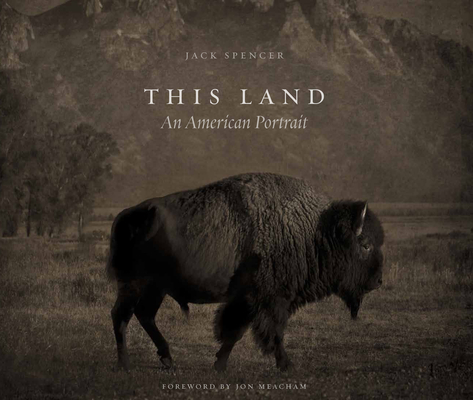 Jarred by the 9/11 attacks, photographer Jack Spencer set out in 2003 “in hopes of making a few ‘sketches’ of America in order to gain some clarity on what it meant to be living in this nation at this moment in time.” Across thirteen years, forty-eight states, and eighty thousand miles of driving, Spencer created a vast, encompassing portrait of the American landscape that is both contemporary and timeless.

This Land presents some one hundred and forty photographs that span the nation, from Key West to Death Valley and Texas to Montana. From the monochromatic and distressed black-and-white images that began the series to the oversaturated color of more recent years, these photographs present a startlingly fresh perspective on America. The breadth of imagery in This Land brings to mind the works of such American masters as Edward Hopper, Grant Wood, Mark Rothko, and Albert Bierstadt, while also evoking the sense of the open roads traveled by Woody Guthrie and Jack Kerouac. Spencer’s pictorialist vision embraces the sweeping variety of American landscapes—coasts, deltas, forests, deserts, mountain ranges, and prairies—and iconic places such as Mount Rushmore and Wounded Knee. Jon Meacham writes in the foreword that Spencer’s “most surprising images are of a country that I suspect many of us believed had disappeared. The fading churches, the roaming bison, the running horses: Spencer has found a mythical world, except it is real, and it is now, and it is ours.”

JACK SPENCER is a fine art photographer whose work is in major private and public collections, including the Museum of Fine Arts, Houston; the Berkeley Art Museum; the Santa Barbara Museum of Art; the Ogden Museum of Southern Art, New Orleans; the Brookings Institution, Fairfax, Virginia; the Tennessee State Museum, Nashville; the Mississippi Museum of Art, Jackson; and the Cleveland Museum of Art. In 2005, he received the Lucie Award for International Photographer of the Year in the nature category. His work has been published in the monographs Native Soil, Jack Spencer, and Jack Spencer: Beyond the Surface.

New York Times best-selling author Jon Meacham won the Pulitzer Prize for American Lion: Andrew Jackson in the White House. He is also the author of the acclaimed volumes Destiny and Power: The American Odyssey of George Herbert Walker Bush and Thomas Jefferson: The Art of Power. He currently serves as executive editor and executive vice president of Random House.

"Spencer dazzles us with his visual poetry while at the same time guiding us to look beyond his images. He explores the delicate balance struck with what our culture demands and what truly is important to lead a fulfilling life."
— Great Plains Quarterly

"Spencer has given us a great gift."
— Garden & Gun