The Texanist: Fine Advice on Living in Texas (Hardcover) 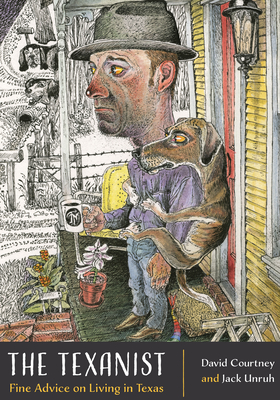 The Texanist, Texas Monthly’s perennially popular back-page column, has become the magazine’s most-read feature. With an inimitable style and an unassailable wholesomeness, columnist David Courtney has counseled many a well-intentioned Texan, native or wannabe, on how to properly conduct him- or herself. Until the July 2016 issue, an original illustration by the late award-winning artist Jack Unruh, depicting the Texanist in a situation described in the column, accompanied the Texanist’s sage wisdom. Unruh’s peerless illustrations displayed a sly wit that paired perfectly with Courtney’s humorous ripostes.

The Texanist gathers several dozen of Unruh’s most unforgettable illustrations, along with the fascinating, perplexing, and even downright weird questions that inspired them. Curing the curious, exorcizing bedevilment, and orienting the disoriented, the Texanist advises on such things as: Is it wrong to wear your football team’s jersey to church? When out at a dancehall, do you need to stick with the one that brung ya? Is it real Tex-Mex if it’s served with a side of black beans? Can one have too many Texas-themed tattoos? The Texanist addresses all of these important subjects and more. Whether you heed the good guidance, or just enjoy the whimsical illustrations, The Texanist will both entertain and educate you.

David Courtney joined Texas Monthly in 2005 and has written The Texanist since 2007. He has also contributed to features such as the annual Bum Steer Awards, the quinquennial review of the fifty best barbecue joints in Texas, “The Great Terquasquicentennial Road Trip,” “The 50 Greatest Hamburgers in Texas,” “The 40 Best Small-Town Cafes,” as well as “Snap Judgment” (a compilation of the ten greatest plays in Texas college football history) and “The Texanist’s Parenting Quiz,” among others.