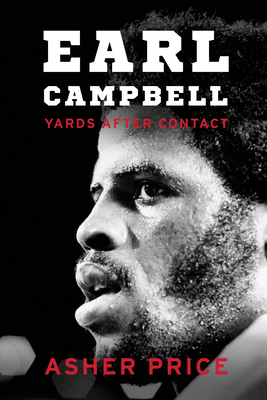 Earl Campbell was a force in American football, winning a state championship in high school, rushing his way to a Heisman trophy for the University of Texas, and earning MVP as he took the Houston Oilers to the brink of the Super Bowl. An exhilarating blend of biography and history, Earl Campbell chronicles the challenges and sacrifices one supremely gifted athlete faced in his journey to the Hall of Fame. The story begins in Tyler, Texas, and features his indomitable mother, a crusading judge, and a newly integrated high school, then moves to Austin, home of the University of Texas (infamously, the last all-white national champion in college football), where legendary coach Darrell Royal stakes his legacy on recruiting Campbell. Later, in booming, Luv-Ya-Blue Houston, Campbell reaches his peak with beloved coach Bum Phillips, who celebrates his star runner’s bruising style even as it takes its toll on Campbell’s body.

Drawing on new interviews and research, Asher Price reveals how a naturally reticent kid from the country who never sought the spotlight struggled with complex issues of race and health. In an age when concussion revelations and player protest against racial injustice rock the NFL, Campbell’s life is a timely story of hard-earned success—and heart-wrenching sacrifice.

Asher Price is a state desk reporter for the Austin American-Statesman. He is also author of Year of the Dunk and coauthor of The Great Texas Wind Rush. He lives in Austin with his wife and daughter.

Thoughtful…A well-crafted life of a man who, though now largely out of the spotlight, enjoyed a storied career.
— Kirkus

For anyone who wants to understand what made one of the game's greatest running backs tick, [Earl Campbell is] well worth your time.
— Mike Freeman

[A] comprehensive biography…Will appeal to readers wishing to learn more about Campbell and this era of both college and professional sports as well as Texas history.
— Library Journal

Asher Price's book about the legendary UT running back is full of surprises.
— Texas Monthly

[Campbell's story] is captured in riveting detail and with crisp analysis…The point of Earl Campbell: Yards After Contact…is to recenter the running back and his career in our understanding of the history of both football and race in Texas…It’s an important story, and Price tells it well."
— Texas Observer

Carefully crafted, but brutally honest, [Earl Campbell is] as much a commentary on race and football culture as it is a tribute to the Heisman Trophy winner and two-time NFL MVP.
— Austin Monthly

A revealing story of race and class in Texas.
— austin360

Deeply researched and reported...Earl Campbell is an argument against the insistent call for athletes and sportswriters to 'stick to sports' and ignore the larger world—an argument we still hear in the age of Colin Kaepernick and the NBA vs. China.
— Texas Monthly

A gripping and very powerful account of what Earl Campbell had to fight through to push along the integration of Texas football.
— Literary Hub