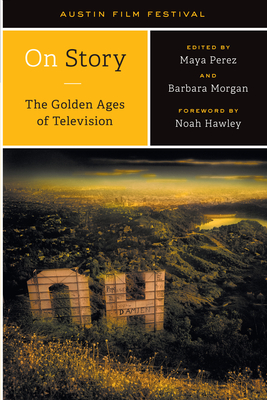 “On Story is film school in a box, a lifetime’s worth of filmmaking knowledge squeezed into half-hour packages.”
—Kenneth Turan, film critic for the Los Angeles Times

Austin Film Festival (AFF) is the first organization to focus on writers’ creative contributions to film and television. Its annual Film Festival and Conference offers screenings, panels, workshops, and roundtable discussions that help new writers and filmmakers connect with mentors and gain advice and insight from masters, as well as reinvigorate veterans with new ideas. To extend the Festival’s reach, AFF produces On Story, a television series currently airing on PBS-affiliated stations and streaming online that presents high-caliber artists talking candidly and provocatively about the art and craft of screenwriting and filmmaking, often using examples from their own work.

Maya Perez is a writer and producer who coedited the previous volumes of On Story. She produces the television series Austin Film Festival’s On Story, currently in its seventh season on PBS, which won a Lone Star EMMY Award® for Best Arts/Entertainment Program in 2014 and was nominated for an EMMY Award® in 2016.

Barbara Morgan cofounded the Austin Film Festival in 1993 and has served as the sole executive director since 1999. She developed and produces the TV and radio series Austin Film Festival’s On Story, currently airing on PBS stations nationally as well as on Public Radio International. She also coedited the previous volumes of On Story.

This book features something for everyone. Pop culture fans will enjoy the inside stories about their favorite programs; details about casting, relationships, and story development are often as entertaining as the shows themselves. Writers will draw inspiration from the creative processes used and challenges faced by the biggest names in the business. Scholars will appreciate the contribution the interviews make to our study of television.
— Popular Culture Studies Journal