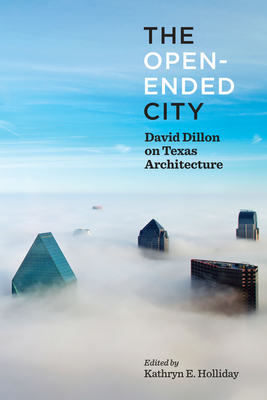 In 1980, David Dillon launched his career as an architectural critic with a provocative article that asked “Why Is Dallas Architecture So Bad?” Over the next quarter century, he offered readers of the Dallas Morning News a vision of how good architecture and planning could improve quality of life, combatting the negative effects of urban sprawl, civic fragmentation, and rapacious real estate development typical in Texas cities. The Open-Ended City gathers more than sixty key articles that helped establish Dillon’s national reputation as a witty and acerbic critic, showing readers why architecture matters and how it can enrich their lives.

Kathryn E. Holliday discusses how Dillon connected culture, commerce, history, and public life in ways that few columnists and reporters ever get the opportunity to do. The articles she includes touch on major themes that animated Dillon’s writing: downtown redevelopment, suburban sprawl, arts and culture, historic preservation, and the necessity of aesthetic quality in architecture as a baseline for thriving communities. While the specifics of these articles will resonate with those who care about Dallas, Fort Worth, and other Texas cities, they are also deeply relevant to all architects, urbanists, and citizens who engage in the public life and planning of cities. As a collection, The Open-Ended City persuasively demonstrates how a discerning critic helped to shape a landmark city by shaping the conversation about its architecture.

Kathryn E. Holliday is an associate professor of architecture at the University of Texas at Arlington, where she is also the founding director of the David Dillon Center for Texas Architecture. She is the author of Leopold Eidlitz: Architecture and Idealism in the Gilded Age and Ralph Walker: Architect of the Century.

A welcome reminder of [Dillon's] intelligence and flair for the mot juste…Together, the essays describe a critic who engaged architecture in the broadest sense, looking not just at individual buildings, but at the impact of urban planning decisions, transportation systems, housing policy, history, and the relationship between city and suburb.
— Dallas Morning-News

Many of the pieces will resonate across the country, especially in postwar Sun Belt cities, but North Texas is lucky to have Dillon's observations contained in this resonant volume…It is built to last.
— D Magazine

With articles in chronological order across each chapter and titles that are highly descriptive..., it's easy to jump around [The Open-Ended City] based on one's interests. Of course, given Dillon's focus on local criticism, residents of Dallas will be drawn to the book more than outsiders. But in 2019, when architectural criticism in the US is hard to come by..., Dillon's articles still provide plenty of lessons while tracing a changing metropolis he influenced in his own way.
— A Daily Dose of Architecture

From the first essay to the last, [David Dillon] condemned simplistic 'big-picture thinking'...and argued for design that would bring actual human connection back to city streets. Holliday writes that Dillon 'maintained a persistent belief in the ability of an engaged citizenry to demand higher quality and greater accountability for urban context,' and that he championed 'a richer social life for the city as a whole.' That makes him a model worth emulating, and his essays worth reading.
— Southwestern Historical Quarterly

Dillon is...among the few Texas newspaper writers whose columns have been collected in book form. As such, his pieces on social equity, land use, suburban sprawl, downtown redevelopment and historic preservation can be read in any order and enjoyed for their potent opinions and carefully laid out arguments.
— Austin American Statesman

[The Open-Ended City] is constructed in a way that highlights Dillon’s varied interests, and his voice, as well as his unique ability to '[tell] stories about architecture and cities [through] focusing on stories about people'...Dillon’s writing, and [Kathryn] Holliday’s editing of it, remind us that there must be careful watchers of the collisions that happen on the seam where public projects and private money meet. This book is an example of the fourth estate at its best. Not moralizing, not virtue-signaling, but compelling description, subtle perception, and the ability to capture the imagination via character, narrative, and gorgeous prose.
— Technoculture