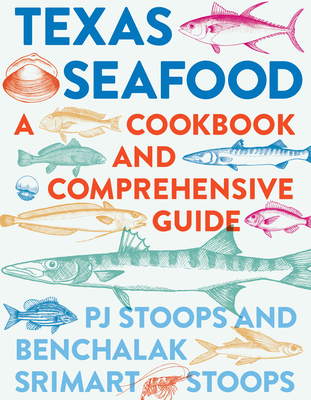 The abundance of seafood available from the northwest Gulf of Mexico includes hundreds of delicious species that are often overlooked by consumers. Celebrating this regional bounty, Texas Seafood showcases the expertise of longtime fishmongers and chefs PJ and "Apple Srimart" Stoops. Readers will find familiar fish like Red Snapper along with dozens of little-known finfish and invertebrates, including tunas, mackerels, rays, and skates, as well as bivalves, shrimps, crabs, and other varieties, many of which are considered “bycatch” (seafood that a fisher didn’t intend to catch), but that are no more difficult to prepare and just as delicious as those commonly found at your local supermarket.

The Stoopses provide a complete primer on sourcing these wild-caught delicacies, with fascinating details about habitats and life cycles as well as practical advice on how to discern quality. Texas Seafood concludes with simple, delectable recipes, many infused with the flavors of Apple’s Thai heritage. Dishes such as Steamed Curried Crab, Crispy White Shrimp, Escolar on a Grill with Green Mango Salad, Cast-Iron-Roasted Shortfin Mako Shark with Rio Grande Grapefruit, and Chicken-Fried Ribbonfish are just a few ways to savor the best of the Gulf.

PJ Stoops and Benchalak Srimart Stoops are experienced fishmongers and were the chefs at Foreign Correspondent, a farm-to-table northern Thai eatery that was named one of Bon Appétit’s Best New Restaurants in 2015. PJ Stoops was also the driving force behind Houston’s “Total Catch Market,” a regular event that sold bycatch seafood from the Gulf of Mexico.

A valuable compendium no matter where you live, Texas Seafood encourages you to explore uncommon varieties from your local fishmonger.
— Wall Street Journal

By documenting in such detail what's below the surface in our Texas waters, [Texas Seafood] reveals a treasure. Not just for a local market but beyond: the national and even global market.
— Edible Houston

A compendium of just about all the seafood you can eat—and catch—in Texas…an important addition to every local foodie's culinary library.
— Edible San Antonio

'Comprehensive' is an understatement for this book…After the insightful fish facts and tips on catching, buying, and prepping seafood, the recipes are a revelation…Texas Seafood proves to be equal parts culinary encyclopedia, environmentalist manifesto, and love letter to the Gulf.
— Texas Monthly

From familiar species, such as shrimp, tuna, crab, and red snapper, to the lesser-known (yet delicious) species often overlooked by consumers, Texas Seafood is a celebration of our regional bounty.
— The Literary South

A comprehensive volume that guides the reader through hundreds of lesser-known edible species found in the Gulf waters along the Texas Coast...This encyclopedic hardcover is a must have for anyone [interested] in the food and fish of Texas.
— Houston Food Finder

From steamed curried crab to chicken-fried ribbonfish, [Texas Seafood's] meals will have readers eating like they're right on the Texas Gulf Coast.
— Alcalde

[Texas Seafood is] a must-have for anyone even remotely interested in the bounty the state's waters have to offer…This one's a catch, y'all. Don't miss out.
— San Antonio Express-News