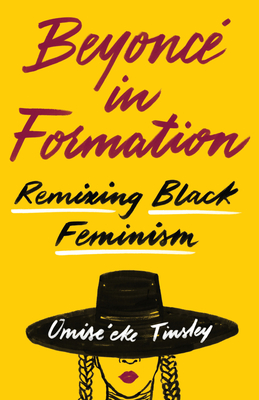 Making headlines when it was launched in 2015, Omise’eke Tinsley’s undergraduate course “Beyoncé Feminism, Rihanna Womanism” has inspired students from all walks of life. In Beyoncé in Formation, Tinsley now takes her rich observations beyond the classroom, using the blockbuster album and video Lemonade as a soundtrack for vital new-millennium narratives.

Woven with candid observations about her life as a feminist scholar of African studies and a cisgender femme married to a trans spouse, Tinsley’s “Femme-onade” mixtape explores myriad facets of black women’s sexuality and gender. Turning to Beyoncé’s “Don’t Hurt Yourself,” Tinsley assesses black feminist critiques of marriage and then considers the models of motherhood offered in “Daddy Lessons,” interspersing these passages with memories from Tinsley’s multiracial family history. Her chapters on nontraditional bonds culminate in a discussion of contemporary LGBT politics through the lens of the internet-breaking video “Formation,” underscoring why Beyoncé’s black femme-inism isn’t only for ciswomen. From pleasure politics and the struggle for black women’s reproductive justice to the subtext of blues and country music traditions, the landscape in this tour is populated by activists and artists (including Loretta Lynn) and infused with vibrant interpretations of Queen Bey’s provocative, peerless imagery and lyrics.

In the tradition of Roxanne Gay’s Bad Feminist and Jill Lepore’s best-selling cultural histories, Beyoncé in Formation is the work of a daring intellectual who is poised to spark a new conversation about freedom and identity in America.

Omise’eke Natasha Tinsley is an associate professor of African and African Diaspora studies and associate director of the Center for Women’s and Gender Studies at the University of Texas at Austin, where she teaches the popular course Beyoncé Feminism, Rihanna Womanism. Tinsley is the author of Thiefing Sugar: Eroticism between Women in Caribbean Literature and Ezili’s Mirrors: Imagining Black Queer Genders.

Lemonade is proving to be a modern Mona Lisa, a work of art ripe for both academic analysis and inner reflection—modes Tinsley mixes and remixes in this lively, erudite memoir-cum-cultural critique that uses Queen Bey’s seminal album to examine her own life as a black Southern femme.
— O, The Oprah Magazine

You'll come away from each chapter with a new appreciation of what Beyoncé has meant to women, particularly black women, across the country.
— The Current

Sure to appeal to scholars and pop-culture enthusiasts alike, this provocative book works to blur the lines between straight and gay black feminism. . . Lively and intelligent reading.
— Kirkus Reviews

[Translates] the visual and audio to another plane entirely, and will undoubtedly inspire much rewatching and relistening.
— Booklist

Tinsley's…critical analysis of black women's sexuality, gender, and identity through the gaze of Beyoncé and the Lemonade album is especially important as her queer black perspective dissects Queen Bey in a way that only a black women-loving black woman could.
— The Feminist Press

[Tinsley's] approach…keeps the text accessible to music fans while underlining the book's central thesis: that Lemonade is one of the great black feminist works of this century and it deserves an exalted place in the canon of women's studies.
— austin360

Beyoncé in Formation is a remarkably pleasing book. It takes the reader by the hand and, skipping delightedly, leads her into a universe of happy, sexy, loving fandom, where Beyoncé is queen and all are welcome at worship.
— Houston Chronicle

With all the headlines it generated upon its release, it's hard to believe there's anything left to say about Beyoncé's Lemonade. Yet, Omise'eke Natasha Tinsley…manages to find new meaning in this cultural analysis of the already iconic record.
— Exclaim

An insightful cultural reading of the performer combined with memoir.
— The Globe and Mail

...expands on [Tinsley's] popular course in a vibrant blend of memoir and cultural analysis.
— Broadly

A call for solidarity among Black feminists, this painfully beautiful read reminds us that none of us are free until we are all free.
— Bust Magazine

This 'mixtape' memoir is an empowering presentation that encourages readers to think outside the box...when it comes to defining feminism.
— Philadelphia Tribune

Part scholarly treatise and part family history, part lavish scrapbook and part justice-oriented advocacy—you've never read a book quite like this.
— The Millions

Accessible and compulsively readable. The Beyhive will ride with [Tinsley's] breathless video analyses, but I especially love Tinsley's candid stories about her own life and loves.
— The Rumpus

Tinsley's commitment to theorizing Black queer femme gender and sexuality opens up a space for lesbian, bisexual, transgender, and queer Black women that most Black feminist projects neglect to address…Tinsley demonstrates the Black feminist practice of bringing one's self into their writing without overshadowing the larger contributions of their research much like the 2018 books Thick by Tressie M. Cottom and Eloquent Rage by Brittney Cooper.
— Ethnic and Racial Studies