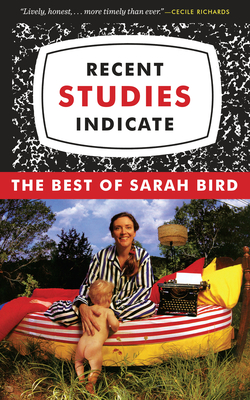 When Sarah Bird arrived in Austin in 1973 in pursuit of a boyfriend who was “hotter than lava,” she found an abundance of inspiration for storytelling (her sweetheart left her for Scientology, but she got to taste a morsel of Lynda Bird Johnson’s poorly preserved wedding cake as a temp worker at the LBJ Library). Sarah Bird went on to write ten acclaimed novels and contribute hundreds of articles to publications coast to coast, developing a signature voice that combines laser-sharp insight with irreverent, wickedly funny prose in the tradition of Molly Ivins and Nora Ephron

Now collecting forty of Bird’s best nonfiction pieces, from publications that range from Texas Monthly to the New York Times and others, Recent Studies Indicate presents some of Bird’s earliest work, including a prescient 1976 profile of a transgender woman, along with recent calls to political action, such as her 2017 speech at a benefit for Annie’s List.

Whether Bird is hanging out with socialites and sanitation workers or paying homage to her army-nurse mom, her collection brings a poignant perspective to the experience of being a woman, a feminist, a mother, and a Texan—and a writer with countless, spectacular true tales to tell us.

Sarah Bird is the author of ten novels, most recently the historical work Daughter of a Daughter of a Queen. In addition to working as a screenwriter, Bird has served as a columnist for Texas Monthly and as an occasional contributor to numerous national publications, including O, The Oprah Magazine; the New York Times Magazine; Salon; The Daily Beast; and Glamour. Her many accolades include induction into the Texas Literary Hall of Fame.

These essays are a pleasure; Bird makes her readers feel smart, urbane, and in on the joke, and that their own stories are worth sharing too.
— Publishers Weekly

Bird brings her signature no-nonsense wit to topics ranging from motherhood and politics to, of course, the Long Star State.
— Austin Monthly

Delightful…you can open the book to just about any story and enjoy a few minutes of good reading and, more likely than note, a hearty laugh.
— Abilene Reporter-News

In her first collection of nonfiction that encompasses over four decades of work, Bird shows off her wit and wisdom on subjects ranging from motherhood to making Texas her adopted home...After reading these entertaining essays, a reader might feel like she’s put in a satisfying visit with an old friend.
— Texas Highways