My Shadow Is My Skin: Voices from the Iranian Diaspora (Hardcover) 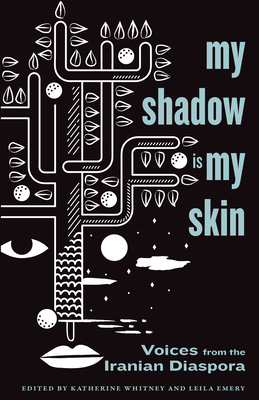 The Iranian revolution of 1979 launched a vast, global diaspora, with many Iranians establishing new lives in the United States. In the four decades since, the diaspora has expanded to include not only those who emigrated immediately after the revolution but also their American-born children, more recent immigrants, and people who married into Iranian families, all of whom carry their own stories of trauma, triumph, adversity, and belonging that reflect varied and nuanced perspectives on what it means to be Iranian or Iranian American. The essays in My Shadow Is My Skin are these stories.

This collection brings together thirty-two authors, both established and emerging, whose writing captures the diversity of Iranian diasporic experiences. Reflecting on the Iranian American experience over the past forty years and shedding new light on themes of identity, duality, and alienation in twenty-first-century America, the authors present personal narratives of immigration, sexuality, marginalization, marriage, and religion that offer an antidote to the news media’s often superficial portrayals of Iran and the people who have a connection to it. My Shadow Is My Skin illuminates a community that rarely gets to tell its own story.

Katherine Whitney first wrote on the Iranian diaspora in the anthology Because I Said So: 33 Mothers Write About Children, Sex, Men, Aging, Faith, Race & Themselves. She graduated from Duke University and received an MA in Museum Studies from John F. Kennedy University.

Leila Emery is a writer and editor whose work has appeared in Michigan Quarterly Review, Parentheses Journal, Matter, and Lines+Stars. She is a graduate of Smith College and holds an MA in creative writing from Johns Hopkins University.

The narratives in this collection go a long way toward making Iranian American immigrants visible. Offering familiar stories with a distinctive flavor, My Shadow Is My Skin deftly explores their mixed feelings of pride and love, and of dislocation and criticism, for both the lost ancestral homeland and the new world, providing an important addition to our ever-unfolding understanding of American immigrant experiences.
— Washington Post

[My Shadow Is My Skin] offers a powerful antidote to the reductive images by giving voice to a chorus of experiences by Iranian American writers. These are vivid and powerful human stories told by a diverse collection of writers who span a range of immigration experiences...At a time when we need to see Iranian Americans are indeed here, and that their stories matter, we now have a wonderful new collection that offers more nuanced and powerful images than those being continuously recycled in the headlines.
— The Rumpus

My Shadow is My Skin, beautifully and aptly named, presents a collection of incredibly personal, sometimes painful stories. With a range of experiences and topics, such as religion, sexuality, racism, and war, the essays provide a deeper look at a community often misunderstood by our peers, and misrepresented by the country we call home. The Iranian-American story is long and complex, with intermarriage, assimilation, and different waves of immigration, there are so many stories to tell. This anthology offers a variety of stories that glimpse at the rich tapestry of this experience.
— National Iranian American Council

The insight provided by most of [the essays in My Shadow is My Skin] would certainly be eye-opening to non-immigrants. Then, of course, there are those whose own experience might be reflected in these writings which doubtless would find some solace in the knowledge that they did not struggle alone. All in all, through noble endeavors such as the compiling of this collection, one can say it is a good time to be an Iranian in exile.
— Peyk Magazine

[My Shadow Is My Skin] boasts a uniquely heterogenous collection of diasporic writing.
— Iranian Studies