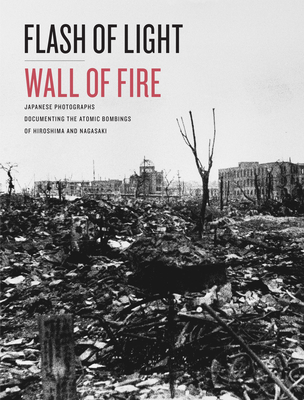 By Dolph Briscoe Center for American Histor
$50.00
On Our Shelves Now

In August 1945, the United States dropped atomic bombs on Hiroshima and Nagasaki, and the immediate aftermath was documented by Japanese photographers. For the most part the images they produced were censored or confiscated, but many were preserved in secret. Some were published widely in Japan during the 1950s, though not in the United States. Later, prints and negatives were gathered by groups such as the Anti-Nuclear Photographers' Movement of Japan, whose collection is now housed at the Briscoe Center for American History. The center's Hiroshima and Nagasaki Atomic Bomb Photographs Archive consists of more than eight hundred photographs, over one hundred of which are seen here for the first time in an English-language publication.

To mark the seventy-fifth anniversary of the bombings, Flash of Light, Wall of Fire features the work of twenty-three Japanese photographers who risked their lives to capture the devastation. Together these images serve as a visual record of nuclear destruction, the horrific effects of radiation exposure, and the mass suffering that ensued. A preface by Briscoe Center Executive Director Don Carleton, an essay by Michael B. Stoff, and an afterword by Japanese journalist Michiko Tanaka explore how the images were collected and preserved as well as how they helped provoke calls for peace and the abolishment of nuclear weapons.