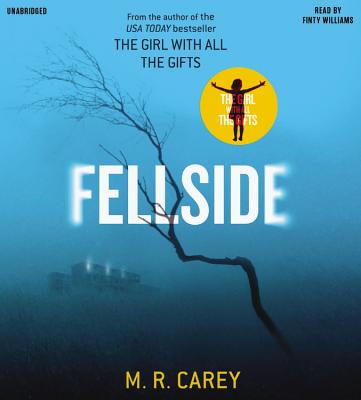 "Orange is the New Black meets Ghost in this follow-up to M. R. Carey's 2014 novel The Girl With All the Gifts. Like his previous novel. I read this one in little over a day and was completely immersed in the narrative. I don't want to give anything away but if you thought Stephen King's Rita Hayworth and the Shawshank Redemption was way too lacking in supernatural events, then this is the book for you."

When Jess Moulson is sent to the private penitentiary of Fellside after being convicted of the murder, she hopes to die. After years of heroin addiction and horrible circumstances, she feels that her life has hit bottom, but when she hears the voice of a little boy who asks her to help him, she sees an opportunity for redemption, for she was sent to prison for killing a little boy in a tragic fire and now he is there with her. There is an entire hegemony in Fellside that she is unaware of, like in any prison, and it is this establishment that will cause her problems. With the corruption, drugs and factions warring for power, her quest is something outside the norm, and she will travel in unusual ways to find the truth. A most entertaining and thrilling read with a bit of supernatural drama that augments the dangerous atmosphere in Fellside.

“Let's say you've been convicted of murder and sent to a maximum security prison for the remainder of your life, which should be a while since you are not that old. Then let's say that not only can you not remember killing anyone, but you can't remember who you are. Could things get any worse? How about if the ghost of the little boy you supposedly killed visits you in prison to ask for your help. What do you do? From the author of The Girl With All the Gifts comes another gripping and unforgettable story.”
— Linda Bond, Auntie's Bookstore, Spokane, WA

The unmissable and highly original new thriller from the author of the international phenomenon The Girl with All the Gifts.

Jess Moulson is convicted of a murder she can't remember committing.

Nothing is quite clear from the drug-fuelled night when a blaze set in her apartment killed the little boy upstairs. But when the media brands Jess a child killer, she starts to believe it herself.

Now she's on her way to Fellside, the biggest, most formidable women's prison in Europe, standing in the bleak Yorkshire moors.

But Jess won't be alone in her prison cell. Lurking in the shadows is an unexpected visitor ... the ghost of the ten-year-old boy she killed. He says he needs her help-and he won't take no for an answer.