With Honor and Integrity: Transgender Troops in Their Own Words (Hardcover) 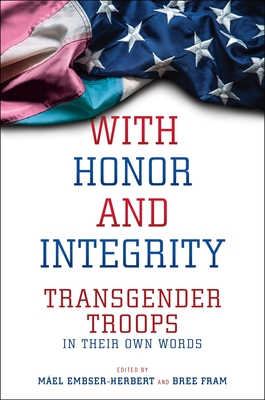 "Prior to coming out as transgender I served the first several years of my career under "Don't Ask, Don't Tell," hiding my sexual orientation out of the constant fear of expulsion. I then found myself in the same predicament as when I first joined, wanting nothing more than to serve my country and do my job, but at the cost of sacrificing a major part of who I am. . . . This time, however, I decided that I could no longer sacrifice my own well-being, my own authentic self."--Mak Vaden, Warrant Officer 1, U.S. Army National Guard, 2006-present "I have traveled around the world. . . . I have been on five cutters with eleven years of sea time and commanded the Coast Guard cutter Campbell. I have negotiated treaties and fostered international law enforcement cooperation. I have stopped drug smugglers and seized illegal fishing vessels on the high seas. And, I also have gender dysphoria and identify as a trans woman."--Allison Caputo, Captain, US Coast Guard, 1995-present On January 25, 2021, in one of his first acts as President, Joe Biden reversed the Trump Administration's widely condemned ban on transgender people in the military. In With Honor and Integrity, M el Embser-Herbert and Bree Fram introduce us to the brave individuals who are on the front lines of this issue, assembling a powerful, accessible, and heartfelt collection of first-hand accounts from transgender military personnel in the United States. Featuring twenty-six essays from current service members or veterans, these eye-opening accounts show us what it is like to serve in the military as a transgender person. From a religious affairs specialist in the Army National Guard, to a petty officer first class in the Navy, to a veteran of the Marine Corps who became "the real me" at age forty-nine, these accounts are personal, engaging, and refreshingly honest. Contributors share their experiences from before and during President Trump's ban--what barriers they face at work, why they do or don't choose to serve openly, and how their colleagues have treated them. Fram, a lieutenant colonel who is serving openly as a transgender woman in the US Space Force, and has advocated for open service policies, shares her experience in the aftermath of Trump's announcement of the ban on Twitter. Ultimately, Embser-Herbert and Fram provide an inspiring look at the past, present, and future of transgender military service. At a time when LGBTQ rights are under siege, and the opportunity to serve continues to be challenged, With Honor and Integrity is a timely and necessary read.