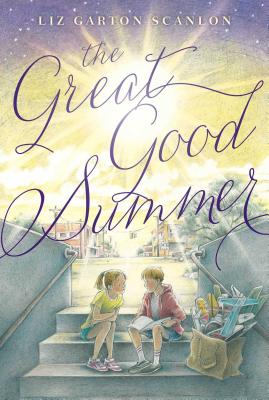 Ivy and Paul hatch a secret plan to find Ivy’s missing mom and say good-bye to the space shuttle in this evocative, heartfelt novel reminiscent of Each Little Bird that Sings and Because of Winn-Dixie.

Ivy Green’s mama has gone off with a charismatic preacher called Hallelujah Dave to The Great Good Bible Church of Panhandle Florida. At least that’s where Ivy and her dad think Mama is. But since the church has no website or phone number and Mama left no forwarding address, Ivy’s not entirely sure. She does know she’s missing Mama. And she’s starting to get just a little worried about her, too.

Paul Dobbs, one of Ivy’s schoolmates, is also having a crummy summer. Paul has always wanted to be an astronaut, and now that NASA’s space shuttle program has been scrapped, it looks like his dream will never get off the ground.

Although Ivy and Paul are an unlikely pair, it turns out they are the perfect allies for a runaway road trip to Florida—to look for Mama, to kiss the Space Shuttle good-bye, and maybe, just maybe, regain their faith in the things in life that are most important.

Liz Garton Scanlon is the author of numerous celebrated picture books, including One Dark Bird; In the Canyon; Happy Birthday, Bunny!; the Caldecott Honor recipient All the World; and Thank You, Garden. Liz is an adjunct professor of creative writing at Austin Community College, and her poetry has been published widely in literary journals. She lives with her family in Austin, Texas. Visit her at LizGartonScanlon.com.

This engaging debut novel hooks readers from beginning to end...This tender and funny story of a strong-willed young girl is reminiscent of Rita Williams-Garcia’s One Crazy Summer (HarperCollins, 2010) and Kate DiCamillo’s Because of Winn-Dixie (Candlewick, 2000).
— School Library Journal *STARRED REVIEW

Ivy's quirky voice narrates the story, which is full of adventure, to be sure, but also meditations on home, family, and the differences—and striking similarities—between science and religion...Equal parts peculiar and poignant, Ivy's story will have readers giggling as they root for her to find everything she's looking for.
— Kirkus Reviews

“It’s the surprise and mystery of it that makes us want to watch,” quips Ivy Green, age 12, about watching remote-control airplanes fly, though she could just as easily be talking about her story itself....The real strength of this folksy novel, the first from picture-book author Scanlon (All the World), is its earnest, nonsaccharine treatment of what it means to have faith and to question it. As Ivy’s trust in her mother is shaken, so is her faith in God (“We wouldn’t be in this fix in the first place if it weren’t for God”). Readers will be rewarded with both genuine adventure and intense reflection as Ivy finds a balance between safe comfort and disquieting wonder.
— Publishers Weekly, *STARRED REVIEW

I loved this book for Ivy's tenderness and strength, for her so-real voice. I loved it for Ivy and Paul's growing friendship and what this says about true love. Liz Garton Scanlon has, with courage and tons of artistry, given us a fun and suspenseful story that is not afraid to ask the big questions.
— Francisco X. Stork, author of Marcelo in the Real World

When Ivy Green can’t take any more missing, when even God seems to have taken off for parts unknown (along with her Mama), redemption nevertheless appears—in the sky, the stars, a kind-of-cute science boy, and a whole cast of people who love her. Liz Garton Scanlon has written a great-good miracle of a book. I can’t stop hugging it.
— Kathi Appelt, author of The Underneath

When Ivy Green’s mom leaves Ivy and her dad to follow a pastor named Hallelujah Dave to the Great Good Bible Church of Panhandle Florida, the seventh-grader’s life is turned upside down. Mr. Green doesn’t seem to know what to do about his missing wife or understand the depth of his daughter’s unhappiness. But Ivy’s newish friend, science-geek Paul, does have an idea: take the bus from their small Texas town to Florida, find Mrs. Green, and then visit the Kennedy Space Center, at Cape Canaveral....Ivy is a delicious character with a smart, believable voice. The conversations between churchgoing Ivy and science-loving Paul are some of the best parts of the book....Give this to readers who like their coming-of-age journeys with a hint of religion and a dose of humor.
— Booklist

This is an engaging story with strong characters and relationships, especially the father–daughter and mother–daughter bonds. The plot moves along quickly, and Ivy is a smart and thoughtful girl who many readers will appreciate. The story shows readers how trying teenage years can be and how difficult it can be to understand your place in social groups, as well as how tough the truth can be to handle. The conversations among all the characters and Ivy are realistic and make the book worth reading.—Karen Sykeny. VOYA
— VOYA

Living in the east Texas town of Loomer should be good for the soul. According to twelve-year-old resident Ivy Green, “We’ve got more churches than Quick Marts. And we have Advent Oil and Lube, and we have Heaven Sent Hair Designs, and we have Creation Concrete. And we pray in school, which the science club doesn’t like, but that doesn’t seem to stop anybody except the kids in science club.” When a series of wildfires devastates the countryside, Ivy’s mama can’t find a speck of that godliness, so, trying to “get right with God,” she up and takes off for Florida with Hallelujah Dave and his Great Good Bible Church. Confused and seemingly helpless to change her situation, Ivy spends the beginning of the summer babysitting and fretting about her mama. But when her classmate, science club member and aspiring astronaut Paul Dobbs, suggests they go to Florida, find Ivy’s mama, and swing by the space shuttle before the program shuts down and dashes his dreams, the two are off on an improbable road trip. And although they travel far geographically, the novel is largely about internal growth as Ivy searches for resolutions that can incorporate her faith and Paul’s scientific view of the world. Although Paul and Ivy’s initial friendship appears a little convenient, their strong bond by story’s end is both honest and moving. An author’s note identifies the two real-life events (the Bastrop, Texas, fires and the final voyage of the space shuttle in 2011) that set the stage for the book.
— Horn Book Magazine

At the outset of summer in the fictional town of Loomer, Texas, Ivy ponders how she is missing a dog, a middle name, and her mother, who has left home without her medication to become part of the Great Good Bible Church of Panhandle, Florida. Set in 2011, the novel begins in the aftermath of a fire in Texas that destroyed hundreds of homes, an event that inspired Ivy’s mother to set out on a search for something. Ivy and her dad do not know why she left or what she is searching for. They have no idea of her whereabouts, because no one knows where the Great Good Bible Church is. Ivy takes solace in her teacher, Mrs. Murray, whose young children she babysits. Circumspect about people’s judgments, Ivy wonders why her mother considers Mrs. Murray kooky when she does so many helpful things for the community and children as coach, teacher, and mother. She delivers the paper every day, writes novels in the summer, and has potted hydrangea. Ivy decides she is “normal as can be,” especially in light of the understanding that “nobody at the Murray house followed a perfect stranger to Florida for the summer, if you know what I mean.” While babysitting, Ivy meets Paul Dobbs, a remote-controlled airplane enthusiast who wants to be an astronaut, and together they make a plan to find Ivy’s mother in Florida. This fast-paced novel includes a journey during which Ivy learns about friendship and standing up for what she believes is right and valuable with humorous insights into the routine and not-so-routine moments of life.
— International Literacy Association, Literacy Daily

It’sa rare book that can discuss faith without verging into the preachy and contemplating the nature of God while acknowledging some people’s lack of belief—all in the voice of an earnest, honest twelve-year old girl. Scanlon manages it in this story of Ivy Green, whose world has turned upside down following her mother’s sudden departure with a holy rolling preacher, elegantly and non-judgmentally addresses belief and non-belief while keeping its focus squarely on the power and mystery of human relationships. When narrator Ivy andher classmate, the science-minded Paul, concoct a plan to leave their small Texas town and track down Ivy’s mother in the Florida panhandle, Ivy struggles to confront the complicated emotions that arise within the intricate bonds of family and friendship. She also learns about herself and her own strength ofcharacter, and the sympathetic and engaging portrayal of Ivy avoids advancing a moral and instead celebrates her personal revelations. Heartfelt in content and authentic in tone, this will resonate with kids questioning their parents, God,or both.
— Bulletin of the Center for Children's Books