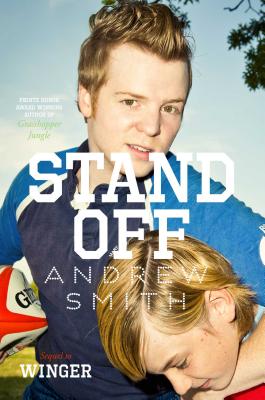 Ryan Dean West is back to his boarding school antics in this bitingly funny sequel to Winger, which Publishers Weekly called “alternately hilarious and painful, awkward and enlightening” (Publishers Weekly, starred review).

It’s his last year at Pine Mountain, and Ryan Dean should be focused on his future, but instead, he’s haunted by his past. His rugby coach expects him to fill the roles once played by his lost friend, Joey, as the rugby team’s stand-off and new captain. And somehow he’s stuck rooming with twelve-year-old freshman Sam Abernathy, a cooking whiz with extreme claustrophobia and a serious crush on Annie Altman—aka Ryan Dean’s girlfriend, for now, anyway.

Equally distressing, Ryan Dean’s doodles and drawings don’t offer the relief they used to. He’s convinced N.A.T.E. (the Next Accidental Terrible Experience) is lurking around every corner—and then he runs into Joey’s younger brother Nico, who makes Ryan Dean feel paranoid that he’s avoiding him. Will Ryan Dean ever regain his sanity?

From the author of the National Book Award–nominated 100 Sideways Miles, which Kirkus Reviews called “a wickedly witty and offbeat novel,” Stand-Off is filled with hand-drawn infographics and illustrations and delivers the same spot-on teen voice and relatable narrative that legions of readers connected with in Winger.

*"A brave, wickedly funny novel about grief and finding a way to live with it, with sweetly realistic first sexual experiences."
— Kirkus Reviews, starred review

"Smith has created a consistently interesting character whose singular sense of humor grows on readers. Plus, he nails the rough-and-tumble sport of rugby. This sequel won’t disappoint fans."
— Booklist

*"The novel succeeds not only as an emotionally satisfying sequel but as a hopeful, honest account of coping with a devastating loss."
— School Library Journal, starred review