Murder Is Bad Manners (A Murder Most Unladylike Mystery) (Paperback) 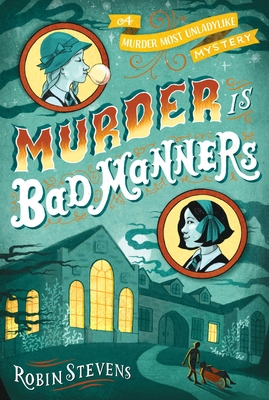 Daisy Wells and Hazel Wong are best friends at Deepdean School for Girls, and they both have a penchant for solving mysteries. In fact, outspoken Daisy is a self-described Sherlock Holmes, and she appoints wallflower Hazel as her own personal Watson when they form their own (secret!) detective agency. The only problem? They have nothing to investigate.

But that changes once Hazel discovers the body of their science teacher, Miss Bell—and the body subsequently disappears. She and Daisy are certain a murder must have taken place, and they can think of more than one person with a motive.

Determined to get to the bottom of the crime—and to prove that it happened—before the killer strikes again, Hazel and Daisy must hunt for evidence, spy on their suspects, and use all the cunning, scheming, and intuition they can muster. But will they succeed? And can their friendship stand the test?

Previously published as Murder Most Unladylike in the UK.

Robin Stevens was born in California and grew up in Oxford, England, across the road from the house where Alice of Alice in Wonderland lived. Robin has been making up stories all her life. She spent her teenage years at boarding school, reading a lot of murder mysteries and hoping that she’d get the chance to do some detecting herself (she didn’t). She studied crime fiction in college and then worked in children’s publishing. Robin now lives in England with her pet bearded dragon, Watson.

"[A] delightful romp....This book, the first in a series, is a "jolly good read," one which intermediate girls will enjoy and share."
— School Library Connection

"[A] first-rate homage to English boarding school adventure and period murder-mystery tales....Middle-schoolers with a taste for Agatha Christie (and perhaps PBS costume or mystery dramas) will eat this up and ask for more."
— The Bulletin of the Center for Children’s

"Stevens’s engaging tale shines with the reflected charms of its detecting duo, a winsome combination of thoughtfulness and relish."
— School Library Journal

"A skillful blend of golden era crime novel and boarding school romp, with a winning central relationship between plump, anxious Hazel, a new girl who has arrived from Hong Kong, and the super-confident blonde English rose, Daisy Wells. The novel works well both as an affectionate satire and an effective mystery story. . . . Top class."
— Suzie Feay

"Satisfyingly unpredictable. I did not guess the whodunit. Ripping good fun."
— Alex O'Connell

"Friendship, boarding school, and a murder worthy of Agatha Christie."
— The Bookseller

"Really cleverly done and unexpected for what I thought would be a straightforward whodunit caper."
— Melissa Cox, Head Children's Buyer at Waterstones

"Reading Murder Is Bad Manners is like drinking cocoa by a fireside: It is warm and witty and deeply satisfying."
— Katherine Rundell, author of ROOFTOPPERS and CARTWHEELING IN THUNDERSTORMS

"Murder Is Bad Manners lured me in with a charming British voice, and then, just as I started to get cozy, snap! I was trapped in a serious mystery problem. Robin Stevens develops her girl detectives with a light, deft touch and delivers denouement with a flourish."
— Nancy Springer, author of the Enola Holmes series

“Robin Stevens's MURDER IS BAD MANNERS is what I wish every mystery could be: a perfectly-plotted puzzle told in a deft and charming voice. The story is a brilliant mixture of classic detective work and contemporary humor—I enjoyed every page!”—
— Jonathan Auxier, author of The Night Gardener and Peter Nimble and His Fantastic Eyes