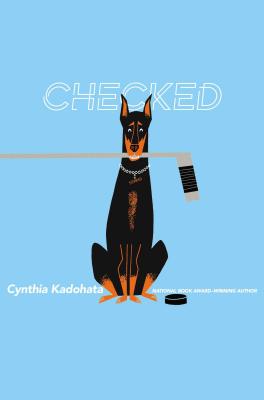 “Kadohata’s slapshot is the heart-swelling narrative of a father and son…Truly powerful.” —Jason Reynolds
“A deeply poignant story about a boy sorting out his priorities.” —Publishers Weekly (starred review)
“A vivid, memorable portrayal of a boy within his family, his sport, and his gradually broadening world.” —Booklist (starred review)

From Newbery Medalist Cynthia Kadohata comes a brilliantly-realized novel about a hockey player who must discover who he is without the sport that defines him.

Hockey is Conor’s life. His whole life. He’ll say it himself, he’s a hockey beast. It’s his dad’s whole life too—and Conor is sure that’s why his stepmom, Jenny, left. There are very few things Conor and his dad love more than the game, and one of those things is their Doberman, Sinbad. When Sinbad is diagnosed with cancer, Conor chooses to put his hockey lessons and practices on hold so they can pay for Sinbad’s chemotherapy.

But without hockey to distract him, Conor begins to notice more. Like his dad’s crying bouts, and his friend’s difficult family life. And then Conor notices one more thing: Without hockey, the one thing that makes him feel special, is he really special at all?

Cynthia Kadohata is the author of the Newbery Medal–winning book Kira-Kira, the National Book Award winner The Thing About Luck, the Jane Addams Peace Award and PEN America Award winner Weedflower, Cracker!, Outside Beauty, A Million Shades of Gray, Half a World Away, Checked, A Place to Belong, Saucy, and several critically acclaimed adult novels, including The Floating World. She lives with her dogs and hockey-playing son in California. Visit her online at CynthiaKadohata.com.

Conor MacRae may not be a stellar student, but the half-Japanese 11-year-old is a champ on the ice. Conor lives and breathes hockey, especially with imminent tryouts for the Grizzlies, a AAA team. When Conor’s pet Doberman gets cancer, he has to decide whether to give up expensive hockey lessons to pay for Sinbad’s chemotherapy. Revealing the sacrifices young athletes and their families must often make, National Book Award winner Kadohata (The Thing About Luck) creates a deeply poignant story about a boy sorting out his priorities. Conor fills readers in on a wealth of hockey details, slowing the pace somewhat, but his problems are deeply relatable, and Kadohata never sugarcoats harsh realities. Conor’s hockey commitments contributed to his father’s and stepmother’s divorce (“When a kid plays travel hockey, it takes up a lot of space in your life. Some people don’t like that”), and their precarious financial situation is viscerally felt. Despite its sad moments, Kadohata’s story is uplifting on balance, sensitively showing how Conor’s hardships have made him wiser and more realistic without diminishing his passions.
— Publishers Weekly *STARRED REVIEW

“Hockey is in my soul,” says Conor, whose father actually played in the NHL for three weeks. Conor’s Japanese American mother died when he was two, but his recently divorced dad completely supports Conor’s devotion to the sport, though it means driving him to private lessons that aren’t easy to afford on a policeman’s salary. A stable, reliable kid, 11-year-old Conor is shaken when he learns that his dog, a Doberman named Sinbad, has cancer and requires expensive treatment. To save money, Conor gives up lessons and starts doing odd jobs for neighbors, but hearing his father cry at night makes him wonder if he’s still asking too much. Immediately engaging, this perceptive novel focuses on the intricacies of Conor’s day-to-day life, while exploring his unusually close relationships with Dad and Sinbad, his attempts to cope during a period of ongoing crisis, and the alternate universe that is the ice during lessons, practices, and games. Even when the story begins to veer toward drama, it soon returns to everyday routine. Yet, the first-person narrative becomes increasingly absorbing throughout the novel, as the characters reveal themselves more fully. Kadohata offers a vivid, memorable portrayal of a boy within his family, his sport, and his gradually broadening world. — Carolyn Phelan
— Booklist *STARRED REVIEW*