Rot, the Cutest in the World! (Hardcover) 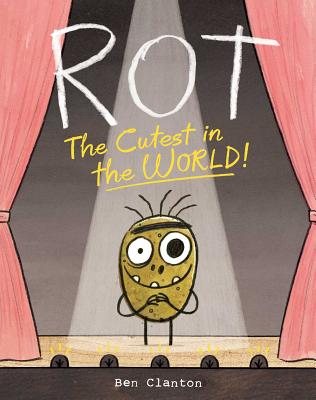 "I don’t mean to be rude and eat our protagonist, but I love potatoes! Especially cute, confident, singing potatoes! Rot enters a beauty pageant, originally pretty sure of himself but then becomes insecure when his fellow contestants– a furry bunny, an adorable kitten, a pink jellyfish– are disgusted by his presence. But guess what? Rot will realize he just has to be himself! A great tale that will end in giggles, but have you craving some french fries. No? Just me? Dang."

A mutant potato learns that he’s pear-fect just the way he is in this bright, fun, and silly picture book from the creator of It Came in the Mail that will have kids collapsing in giggles (and rescuing the contents of the vegetable drawer).

Rot is a mutant potato. Like most mutant potatoes, Rot loves all sorts of games and contests. So when he sees a sign for the “Cutest in the World Contest,” he can’t wait to enter.

But when Rot realizes who he’s up against—an itty-bitty baby bunny, a little-wittle cuddly kitten, and an eenie-weenie jolly jellyfish—he loses confidence. Will the judges find room in their hearts for an adorable mutant potato?

Ben Clanton is an author and illustrator whose books include It Came in the Mail; Something Extraordinary; Rex Wrecks It!; Mo’s Mustache; The Table Sets Itself; Vote for Me!; Rot, the Cutest in the World!; and Rot, the Bravest in the World!. He lives with his wife and son in Seattle, Washington. Learn more at BenClanton.com.

Ben Clanton is an author and illustrator whose books include It Came in the Mail; Something Extraordinary; Rex Wrecks It!; Mo’s Mustache; The Table Sets Itself; Vote for Me!; Rot, the Cutest in the World!; and Rot, the Bravest in the World!. He lives with his wife and son in Seattle, Washington. Learn more at BenClanton.com.

"Nothing wrong with the self-esteem of this moldy potato, who enters a cuteness contest against fluffy bunnies and cuddly kittens. Rot believes in himself until the world does too."
— People Magazine, January 8, 2018, "People Picks: The Best New Books"

"Readers would be hard put to find a decomposing spud with a more winning personality."
— Kirkus Reviews

"Rot is not the cutest in the world. He’s a “mutant potato” with stick legs, four straggling hairs, and a substantial unibrow. What he does have is confidence, and when he sees a sign advertising the Cutest in the World Contest, he’s in.... It’s a challenge to draw a character who’s both repellent and still appealing to readers, but Clanton (Boo Who?) does not pull his punches. He treats familiar themes—being and believing in oneself—with a light hand. And he explores, with sensitivity, the visceral reaction to real ugliness and suggests a path through it to the other side."
— Publishers Weekly, October 2017

"Rot is a mutant potato with sparse hair, unibrow, nubby teeth, and asymmetrical eyes.... Clanton’s use of speech and thought bubbles, dynamic text placement, varying font styles and sizes, ample white space, and great facial expression all make for a fun (and fun to read) tale of self-acceptance. VERDICT: An entertaining and irreverent take on self-confidence; a strong choice for large collections."
— School Library Journal, November 2017

"With his mismatched pupils, different-sized nostrils, and unibrow, Rot isn’t your normal-looking potato.... The mixed-media illustrations in soft colors (brown for Rot and pastels for the others) show only the characters and minimal props against stark backgrounds, which gives this a theaterlike quality and accentuates the performers and action.... While there is a message, it’s the playfulness and fun that are front and center. This deserves at least four rotten potatoes, and in Rot’s world, that’s a good thing."
— Booklist, November 2017