Java Game Development with Libgdx: From Beginner to Professional (Paperback) 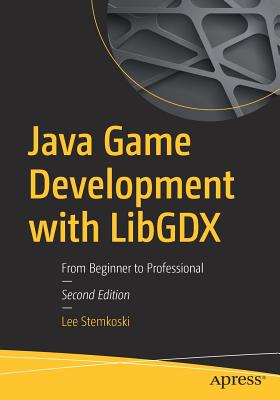 Part I: Fundamental Concepts
The first part of the book explains basic material that will be needed throughout the rest of the book: rendering graphics and animations, processing user input (continuous and discrete), basic physics (movement and collision detection), displaying text, and playing audio (sound effects and background music).
1. Getting started with Java and LibGDX
This chapter explains how to set up a Java development environment (BlueJ), which is chosen for simplicity and user-friendliness. The standard first program (which prints "Hello, World " to the text console) is given. Next, instructions for setting up the LibGDX library are given, and a visual "Hello, World " program is demonstrated (which displays an image of the world in a window). Finally, the benefits of using LibGDX for game development are explained in some detail.
1.1 Choosing a development environment 1.2 Setting up BlueJ 1.3 A "Hello World" program 1.4 Advantages to using LibGDX
2. The LibGDX Framework
This chapter presents the minimal code needed to create a basic game: rendering textures, detecting user input, and collision detection. The game Starfish Collector is introduced, which will be a recurring example throughout the book: features will be added on when introducing new topics (in chapters 3, 5, 6, 10, and 13).
2.1 Understanding the Life Cycle of a Game 2.2 Managing the Action (actors and stages, screens and games) 2.3 The Basics: Graphics, User Input, and Collisions2.4 Game Project: Starfish Collector 3. Extending the Framework
The LibGDX framework simplifies many elementary tasks required in game development, while providing users a variety of ways to extend their framework to facilitate creation of different types of games. This chapter creates a series of classes (BaseActor, BaseScreen, BaseGame) which extend core LibGDX classes, which will streamline the games created in the following chapters. The new classes are used in refactoring the Starfish Collector game from the previous chapter.
3.1 Extending the Actor class 3.2 Animations 3.2.1 Value-based Animations 3.2.2 Image-based Animations 3.3 Physics and Movement 3.4 Polygons and Collisions 3.5 Lists of Actors
4. Shoot-em-up games
To demonstrate the convenience and flexibility of the extended classes created in the previous chapter, this chapter uses the new base classes to create a game called Space Rocks, inspired by the classic arcade game Asteroids. New concepts introduced in this chapter include a new style of movement (relative to the character perspective, rather than the player perspective), spawning new objects, attaching objects to other objects, and adversaries that target the main character.
4.1 Game Project: Space Rocks4.2 Spaceship Setup4.3 Lasers, Rocks, and Explosions 4.4 Endgame Conditions 4.5 Extra Features: Shields and Enemies
5. Text and User Interfaces
This chapter introduces classes that are used to generate image-based fonts and display text using labels, enabling the developer to show the player important game related information (such as score, time left, health points, item counts) and menus containing instructions. The creation of buttons (to change screens or start/pause/quit the game) is also explained. Tables are introduced to automatically manage the layout of these elements. The creation of signpost-like objects is discussed, which can serve as an in-game tutorial or.

Lee Stemkoski is a professor of computer science and mathematics. He earned his Ph.D. from Dartmouth College in 2006. He has been teaching at the college level since then, with an emphasis on Java programming, computer graphics, and video game development for the past eight years. He has refined the set of topics covered and the progression of material in this book based on years of experience helping students overcome their difficulties with these particular topics. He has authored another game development book, Game Development with Construct 2, in addition to many scholarly articles and game development tutorials.