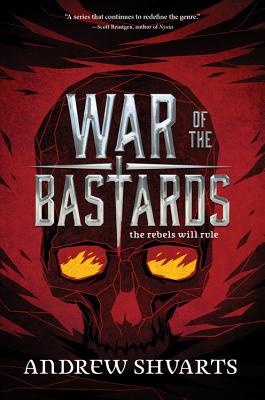 This is book number 3 in the Royal Bastards series.

In the epic conclusion to the Royal Bastards trilogy, Tilla faces an impossible choice: unthinkable destruction in the name of peace...or an uncertain future that means confronting a terrible past.

A year has passed since the fall of Lightspire. The Inquisitor Miles Hampstedt rules Noveris with a blood-soaked iron fist. Tilla and her friends have become hardened rebels in the Unbroken, a band of guerilla fighters hiding out on the fringes of the Kingdom protecting the true queen, Lyriana Volaris. Even as they fight, they know their cause is doomed -- that with every passing day Miles's army of Bloodmages spreads across the continent. But at least they have each other...and some halfway-decent drinks.

After a daring rescue mission, the group frees two vital prisoners: the Raven, a mysterious informant with a deep personal connection to Tilla, and Syan Syee, a strange girl from the Red Wastes who demonstrates an incredible new kind of magic and speaks of a secret civilization hidden in her isolated homeland. With Miles's forces closing in, a ragtag team sets out on an eleventh-hour mission: form an alliance with Syan's people that could turn the tide of the war. But what they discover in the Red Wastes changes everything, including their very understanding of the magic that runs through Noveris -- magic that has brought the Kingdom to the brink of ruin.

Accolades
BookRiot: 150 YA Books Hitting Shelves in April, May, and June 2019: Spring 2019 YA Book Preview, selection

PRAISE FOR CITY OF BASTARDS

PRAISE FOR CITY OF BASTARDS

"This fantasy... is peppered with humorous moments and spiced by a masterfully unveiled mystery. Shvarts constructs a believable society on the edge of toppling, bounded by traditions that may have started as truths but have become lies over time."—Booklist