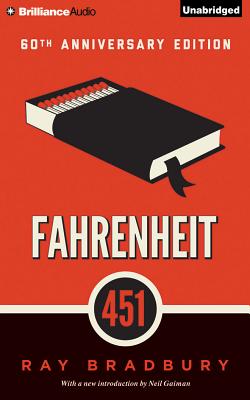 "On the surface, Fahrenheit 451 is about a dude, Guy Montag, who is
dissatisfied with his job, finds himself distanced and alienated from
the woman he married, and begins harboring contraband items in the air
duct in his home.  He is disenchanted with the world he lives in, and
finds everyone to be insipid and shallow, with little real substance or
character. What Fahrenheit 451
is really about, though, is censorship, frivolous entertainment, an
accelerated and shallow lifestyle, and a search for meaning in a world
that has lost its meaning through years of cultural degradation
supported by an apathetic yet war-like government. Today it stands as a reminder that despite our ever more harried and
frenetic lives, despite the advances in technology that separate us
while claiming to bring us closer together, despite the ease with which
we could simply check out and not care about what is happening in the
world around us, both abroad and here at home, we must remain vigilant.
We must always seek a life of substance and meaningful interactions."

Guy Montag is a fireman. In his world, where television rules and literature is on the brink of extinction, firemen start fires rather than put them out. His job is to destroy the most illegal of commodities, the printed book, along with the houses in which they are hidden. Montag never questions the destruction and ruin his actions produce, returning each day to his bland life and wife, Mildred, who spends all day with her television "family." But then he meets an eccentric young neighbor, Clarisse, who introduces him to a past where people didn't live in fear and to a present where one sees the world through the ideas in books instead of the mindless chatter of television. When Mildred attempts suicide and Clarisse suddenly disappears, Montag begins to question everything he has ever known. He starts hiding books in his home, and when his pilfering is discovered, the fireman has to run for his life.