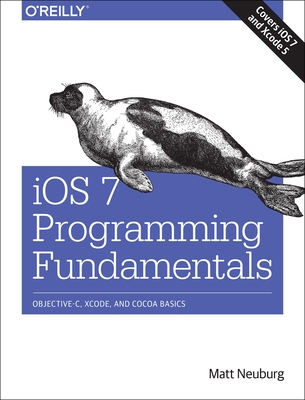 If you're getting started with iOS development, or want a firmer grasp of the basics, this practical guide provides a clear view of its fundamental building blocks--Objective-C, Xcode, and Cocoa Touch. You'll learn object-oriented concepts, understand how to use Apple's development tools, and discover how Cocoa provides the underlying functionality iOS apps need to have. Dozens of example projects are available at GitHub.

Once you master the fundamentals, you'll be ready to tackle the details of iOS app development with author Matt Neuburg's companion guide Programming iOS 7.

Matt Neuburg started programming computers in 1968, when he was 14 years old, as a member of a literally underground high school club, which met once a week to do timesharing on a bank of PDP-10s by way of primitive teletype machines. He also occasionally used Princeton University's IBM-360/67, but gave it up in frustration when one day he dropped his punch cards. He majored in Greek at Swarthmore College, and received his Ph.D. from Cornell University in 1981, writing his doctoral dissertation (about Aeschylus) on a mainframe. He proceeded to teach Classical languages, literature, and culture at many well-known institutions of higher learning, most of which now disavow knowledge of his existence, and to publish numerous scholarly articles unlikely to interest anyone. Meanwhile he obtained an Apple IIc and became hopelessly hooked on computers again, migrating to a Macintosh in 1990. He wrote some educational and utility freeware, became an early regular contributor to the online journal TidBITS, and in 1995 left academe to edit MacTech Magazine. He is also the author of Frontier: The Definitive Guide and REALbasic: The Definitive Guide. In August 1996 he became a freelancer, which means he has been looking for work ever since. He is the author of Frontier: The Definitive Guide and REALbasic: The Definitive Guide, both for O'Reilly & Associates.