A Promise of Fire (The Kingmaker Chronicles) (Mass Market) 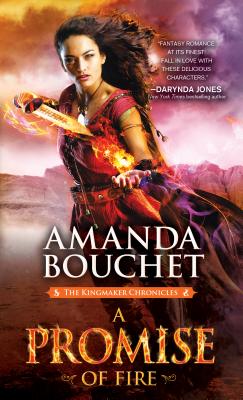 This is book number 1 in the The Kingmaker Chronicles series.

Discover the white-hot fantasy romance that broke all the rules, where a fierce woman with powerful hidden magic goes toe-to-toe with the alpha warlord who abducted her...only to steal her heart.

KINGDOMS WILL RISE AND FALL FOR HER...

Cat Fisa isn't who she pretends to be. She's perfectly content living disguised as a soothsayer in a traveling circus, avoiding the destiny the Gods—and her dangerous family—have saddled her with. As far as she's concerned, the magic humming within her blood can live and die with her. She won't be a pawn in anyone's game.

But then she locks eyes with an ambitious warlord from the magic-deprived south and her illusion of safety is shattered forever.

Griffin knows Cat is the Kingmaker—the woman who divines truth through lies—and he wants her to be a powerful weapon for his newly conquered realm. Kidnapping her off the street is simple enough, but keeping the fierce beauty by his side is infuriatingly tough. Cat fights him at every turn, showing a ferocity of spirit that burns hot...and leaves him desperate for more. But can he ever hope to prove to his once-captive that he wants her there by his side as his equal, his companion...and maybe someday, his Queen?

Get ready to burn: This romantic fantasy reads like the fiercest fairytale and includes a protective alpha warlord, enemies who become so much more, high action, humor, heat, and a dangerous world where mythical creatures hide. Readers will want to return to this fantasy world again and again in its sequels A Breath of Fire and Heart on Fire.

Amanda Bouchet is a USA Today bestselling author of Fantasy Romance and Sci-fi Romance. She was a Goodreads Choice Awards top 10 finalist for Best Debut in 2016. For more about Amanda’s books with equal parts adventure and kissing, connect with her at www.amandabouchet.com.

"High fantasy is a rare find in romance — complex world-building and political machinations can get in the way of a central, essential love story — but Bouchet skillfully melds the genres while crafting a sexy, emotional romance. Griffin and Cat are beautifully matched — together, her magic and his might make for a sparkling read. A Best Romance of the Month." — The Washington Post

"Give this to your Game of Thrones fans. They will love the political plays, the dragons, and the adventure. Bouchet is a debut author to watch." — Booklist STARRED Review

"OH MY GOSH. I haven’t been so blown away in a while… Take a chance on A Promise of Fire. I swear, you’ll thank me later, gushing and singing your own praises about this amazing new series. Well done, Ms. Bouchet. Well done." — Romance Junkies

"Fantasy romance at its finest! This book has it all: A heroine full of spunk and spark, a hero full of mystery and masculinity, and an epic story full of intrigue and action. You will fall in love with these delicious characters. This book is utterly breathtaking!" — Darynda Jones, New York Times bestselling author of the Charley Davidson series

"An epic, sweeping novel of romance, magic, mythology and war, A Promise of Fire was simply awesome!" — The Romance Reviews, 5 Stars Top Pick

"A Promise of Fire is one of the best books I've read in years… This is something quite new in a pile of the same old same old. So if you want to be transported into a fantasy kingdom, don't miss out on this story. Reviewer Top Pick!" — Night Owl Reviews

"Every summer should have one hotly anticipated read and for romance fantasy fans this year that read should be A Promise of Fire by Amanda Bouchet. A perfect blend of adventure and love story with a fantastic hero and heroine at its center, this is a not to be missed story of gods and goddesses, magic, prophecies and the power of true love." — Heroes & Heartbreakers

"I can say, without a doubt, that A Promise of Fire is going on my keeper shelf. I want more of these characters and I want more of this world. I cannot remember the last time I wanted to both savor and devour a book, and Bouchet’s writing is so engaging and magical that I wish she had some sort of backlist I could dive into for the next few months. If you’re even slightly tempted by this review or from the chapter one excerpt, buy this book." — Smart Bitches, Trashy Books

"If you’re looking for a magical book with heart, romance, adventure, and characters who stay with you long after the book ends, try A Promise of Fire. You won’t be disappointed! The Kingmaker Chronicles is sure to be a huge hit and well-worth the praise-worthy buzz it’s already getting far and wide. Amanda Bouchet has made me a desperate fan. 5 Stars, Recommended Read." — Romance Junkies

"Really great start to the series. There is a solid HEA, although the big conflict with people in the realm who want to hurt Cat and Griffin is not over yet – Breath of Fire and Heart on Fire release next year. A-" — Smexy Books

"A Promise of Fire made me laugh out loud more than once." — Thea Harrison, New York Times bestselling author of the Elder Races series

"A Promise of Fire is terrific . . . one of the best debuts I’ve read in years." — Kirkus STARRED Review

"Easily my favorite book of 2016! It’s gritty, full of action, and Bouchet does such a beautiful job of building the setting. I was hooked from the first page." — Bookriot

"Soooo good!! The characters are wonderfully likeable, the world is unique and full of intrigue, and there's just this deep sense of warmth to the book that I loved and that kept me inhaling the story. I CANNOT WAIT to read the next book!!!" — NALINI SINGH, New York Times bestselling author