In the Time of the Revolution: Living the War of American Independence (Hardcover) 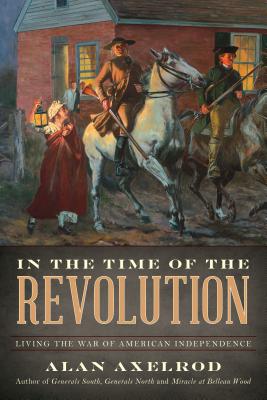 The American Revolution was a war, but it was also a time, a span of history, in which some people fought, but most just lived. They thought, acted, worked, raised families, worshipped, built, sold, bought, and tried to live as best they could in a time of hope, anxiety, despair, loss, gain, and, above all, disruption. In the Time of the Revolution is a popular, single-volume history of the American Revolution, 1775 to 1783, an intensely active, exciting, and critical span of time in North America. It began with a lopsided skirmish at Lexington, Massachusetts, culminated militarily in a major amphibious campaign mounted by a large Franco-American army against British army and naval forces at Yorktown, Virginia in 1781, and then passed through two more years of desultory combat and cruel fights between diehard Loyalists and vengeful Patriots before ending in the Treaty of Paris. During these eight years in an America that was a collection of young towns on the edge of a vast wilderness, the break-up with the mother country was the central fact of life.

Alan Axelrod is the author of many books on leadership, history, and military history, including Miracle at Belleau Wood (Lyons Press, 2018), The Battle of the Somme (Lyons Press, 2016), The Battle of Verdun (Lyons Press, 2016), and Selling the Great War: The Making of American Propaganda (Palgrave Macmillan, 2009). He has taught at Lake Forest College (Lake Forest, IL) and Furman University (Greenville, SC) and was most recently a creative consultant and on-screen commentator for The Great War, on the PBS American Experience television series. He lives in Atlanta, Georgia.