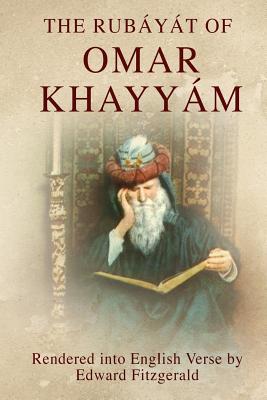 The Rub iy t of Omar Khayy m is the title that Edward FitzGerald gave to his translation of a selection of poems, originally written in Persian and numbering about a thousand, attributed to Omar Khayy m (1048-1131), a Persian poet, mathematician and astronomer. A ruba'i is a two-line stanza with two parts (or hemistichs) per line, hence the word rub iy t (derived from the Arabic language root for "four"), meaning "quatrains". Mystical interpretation "Wine of the Mystic" by Paramahansa Yogananda, is an illustrated interpretation of the FitzGerald translation. Each quatrain is accompanied with Persian text, a glossary of terms, Yoganada's spiritual interpretation, and practical interpretation. It won the 1994 Benjamin Franklin Award in the field of Religion. Yogananda makes an argument for the mystical basis of Khayyam's Rubaiyat. In Who is the Potter?, Abdullah Dougan, a Naqshbandi Sufi, provides a verse-by-verse commentary of the Rubaiyat. Dougan says that while Omar is a minor Sufi teacher compared to the giants - Rumi, Attar and Sana'i, for us he is a marvelous man because we can feel for him and understand his approach. The work is much more accessible than Sana'i's for instance; "Every line of the Rubaiyat has more meaning than almost anything you could read in Sufi literature". Dougan says that the many critics of Fitzgerald miss the point as he is only an instrument for what Allah wanted to happen - there have been many more literally correct translations, but Fitzgerald's is divine inspiration, something far superior, a miracle. In Dougan's opinion, while many read the Rubaiyat literally and hence see Omar as a materialist, he is in fact a spiritual teacher and is much maligned because people do not understand him. Abdullah Dougan says the work is deeply esoteric and "if you approach the quatrains with that in mind, the poem will have a tremendous impact on you as you try to understand it." Religious beliefs were deeply instilled in the people of the time, which gave much influence to the clergy, and the prosecution of poets who made statements contradictory to religious messages were prevalent, as was the case with Hafiz (whose house was raided several times, and was forced to burn some of his more liberal poems) and Ferdowsi (who was branded a heretic and was not permitted to be buried in the Muslims graveyard). The mystic interpretation of themes in poetry which were contrary to Islamic teachings became popular after the Safavid dynasty rise to power and the establishing of Twelver school of Shi'a Islam as the official religion of Iran. At this time poets such as Ferdowsi (who glorified the pre-Islamic Iran and patriotism), Hafiz (with his Epicurean view on life) and Khayyam (with openly agnostic themed poetry) had already found their roots among Iranian culture and their works were looked upon as masterpieces of Persian literature. In order to justify their popularity and lay "credence" to their messages, many Haram themes were interpreted as having hidden mystical meanings and parallels were drawn between verses and Shi'a themes and traditions. Some religious hardliners however repudiated Khayyam and the like altogether (and to a lesser extent still do today). Putting aside all this Khayyam never identified himself as a Sufi nor did anyone in his time. In fact on several occasions he mocks the devoutly religious who criticize the non religious.

Edward FitzGerald (31 March 1809 - 14 June 1883) was an English poet and writer, best known as the poet of the first and most famous English translation of The Rubaiyat of Omar Khayyam. The writing of his name as both FitzGerald and Fitzgerald is seen. The use here of FitzGerald conforms with that of his own publications, anthologies such as Quiller-Couch's Oxford Book of English Verse, and most reference books up until about the 1960s.