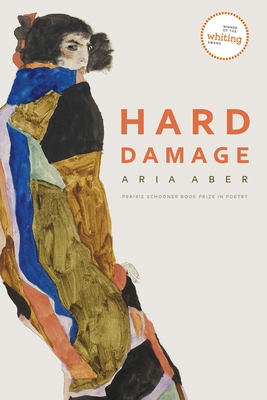 Hard Damage works to relentlessly interrogate the self and its shortcomings. In lyric and documentary poems and essayistic fragments, Aria Aber explores the historical and personal implications of Afghan American relations. Drawing on material dating back to the 1950s, she considers the consequences of these relations—in particular the funding of the Afghan mujahedeen, which led to the Taliban and modern-day Islamic terrorism—for her family and the world at large.

Invested in and suspicious of the pain of family and the shame of selfhood, the speakers of these richly evocative and musical poems mourn the magnitude of citizenship as a state of place and a state of mind. While Hard Damage is framed by free-verse poetry, the middle sections comprise a lyric essay in fragments and a long documentary poem. Aber explores Rilke in the original German, the urban melancholia of city life, inherited trauma, and displacement on both linguistic and environmental levels, while employing surrealist and eerily domestic imagery.

Aria Aber is a Ron Wallace Poetry Fellow at the University of Wisconsin, Madison. Her poems have appeared in the Kenyon Review, the New Yorker, Poetry Magazine, Narrative, and other publications.

“Aber is not afraid of erudition or the hard labor of crafting poems that peel open in layers; at times, reading her work reminded me of poets who have worked across similarly broad linguistic topographies: Carolyn Forché, Frank Bidart, Paul Celan, Sylvia Plath, Wallace Stevens, and others. But Aber’s work here is hardly derivative of those masters. She is her own poet, her own voice, and her debut is my favorite volume of poetry this year.”—Christian Kiefer, Paris Review


“[Hard Damage] does not consent to the simple narrative or the soundbite. It reminds readers that every displaced person, whether refugee, immigrant, or the child of one, carries with them a parcel of stories, stories that are often suppressed and mutated by the dominant culture, or lost to reductive media coverage. . . . Hard Damage allows the songs—and the lives that they contain—to unfurl.”—Marie Scarles, Rumpus


"Winner of the Prairie Schooner Book Prize, Aber's ruminative lyrical debut tracks the movements of a twice-emigrated poet in poems that are personal and confessional."—Publishers Weekly

"Aria Aber’s stunning debut is both deeply personal and deeply historical. Examining the effects of western colonialism on Afghanistan and the consequences of decisions dating back to the 1950s, Hard Damage questions and mourns the idea of citizenship. This collection focuses on stories of displacement, which Aber accomplishes by breaking boundaries, breaking forms, and even breaking language."—Anthony Frame, Chicago Review of Books

"Hard Damage is an immensely satisfying book. It charts immigrant experience in a way which is highly imaginative but also sustained and controlled. It will be fascinating to read what Aber writes next."—Ian Pople, Manchester Review

"Hard Damage, in both its masterful depictions of complicity and its unwavering focus on what is true, asks us to consider what we owe each other as people occupying this same, dying, earth."—Taneum Bambrick, Kenyon Review

"To properly review the new collection Hard Damage . . . you simply want to copy the entire text of the book into your article and just say: Read this. I can add nothing."—Joe Hoover, America: The Jesuit Review

"Language is not static in Aber's work—it's malleable. It can be used to tell a story behind/within a story. . . . There is so much to be fascinated by in this book. So much to reward the reader."—daniellejhanson.com

"Recently, there has been some debate about “Best of” literary lists, whether they are too narrow in their scope or simply biased toward works that have been bestowed with awards, failing to consider the abundance of books that deserves a wider audience. Regardless of where you land in this debate, it’s hard to imagine, as 2019 nears its end, that Hard Damage won’t be on every one of those lists. It’s an incredible achievement that doesn’t sugarcoat the subjects it tackles, and if there is a book that so thoroughly explores the human condition this year, it is undoubtedly Aber’s, one that will move you as much as it will stir serious discussion with others and, most importantly, with yourself."—Esteban Rodriguez, Pank

"This is the book I've been trying to press into everyone's hands for two years. It's a breathtaking poetry collection. The poems—about war, God, love, Afghan history, migration, and Rilke—will leave you goose-bumped and weeping."—theweek.com