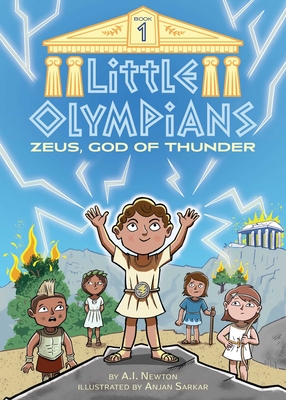 By A.I. Newton, Anjan Sarkar (Illustrator)
$5.99
On Our Shelves Now

Little gods, big personalities! This brand-new series follows little versions of the Greek gods who are at a camp to learn how to control their powers and use them properly--as well as learn to get along with one another.

Zeus is living with his parents, Kronos and Rhea, and he's starting to show his abilities, but his lightning is out of control! Every time he sneezes or gets mad, or is even just plain bored, his lightning shoots out. He tries to keep it under wraps most of the time, but he can't help it, and it causes such a ruckus that his parents decide that it's time he learns to properly use his powers.

So they send him to Eureka, a camp where little gods learn to use and control their supernatural abilities. He's excited to be able to learn to use his powers here, but he's also nervous about going and meeting all the other gods. Apollo and Ares in particular seem very strong (and they let him know it), but he finds friends in the calm and wise Athena and the wisecracking Hermes. But after some trouble with classes, he starts to get discouraged. Will he be able to control his powers with the help of his friends?

A.I. Newton is the author of the Alien Next Door series and he has always been fascinated by the classic tales of the Greek gods. The Little Olympians series gives him a chance to imagine what these powerful beings were like when they were kids, just like you-except, of course, for the incredible powers!

Anjan Sarkar graduated from Manchester Metropolitan University with a degree in illustration. After that, he worked as an illustrator and graphic designer before becoming a freelancer, where he gets to work on all sorts of different projects for people of all ages, like this series and the Alien Next Door! He lives in Sheffield, UK. Find out more about Anjan at anjansarkar.co.uk.