Hymns of the Republic: The Story of the Final Year of the American Civil War (Hardcover) 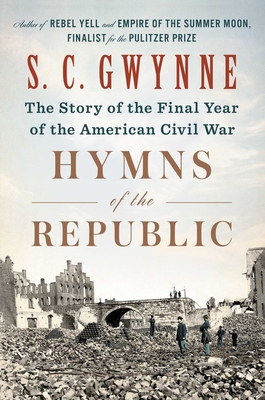 From the New York Times bestselling and award-winning author of Empire of the Summer Moon and Rebel Yell comes “a masterwork of history” (Lawrence Wright, author of God Save Texas), the spellbinding, epic account of the last year of the Civil War.

The fourth and final year of the Civil War offers one of the most compelling narratives and one of history’s great turning points. Now, Pulitzer Prize finalist S.C. Gwynne breathes new life into the epic battle between Robert E. Lee and Ulysses S. Grant; the advent of 180,000 black soldiers in the Union army; William Tecumseh Sherman’s March to the Sea; the rise of Clara Barton; the election of 1864 (which Lincoln nearly lost); the wild and violent guerrilla war in Missouri; and the dramatic final events of the war, including Lee’s surrender at Appomattox and the murder of Abraham Lincoln.

“A must-read for Civil War enthusiasts” (Publishers Weekly), Hymns of the Republic offers many surprising angles and insights. Robert E. Lee, known as a great general and Southern hero, is presented here as a man dealing with frustration, failure, and loss. Ulysses S. Grant is known for his prowess as a field commander, but in the final year of the war he largely fails at that. His most amazing accomplishments actually began the moment he stopped fighting. William Tecumseh Sherman, Gwynne argues, was a lousy general, but probably the single most brilliant man in the war. We also meet a different Clara Barton, one of the greatest and most compelling characters, who redefined the idea of medical care in wartime. And proper attention is paid to the role played by large numbers of black union soldiers—most of them former slaves.

Popular history at its best, Hymns of the Republic reveals the creation that arose from destruction in this “engrossing…riveting” (Kirkus Reviews, starred review) read.

“This brilliantly told account of the final year of the Civil War brings to life the vivid personalities who struggled for control of America’s destiny. At once sweeping and intimate, Hymns of the Republic is a masterwork of history.” —Lawrence Wright, author of God Save Texas

“With Hymns of the Republic, acclaimed author S. C. Gwynne brings the final year of the Civil War to life in the fashion of literary giants Shelby Foote and Bruce Catton. In gripping and poignant prose, Gwynne synthesizes the myriad tragic events into a compelling tale of epic scale. Writing with compassion and rare insight, he also offers vigorous and deeply human portrayals of Lincoln, Grant, Lee, Sherman and less familiar figures whose actions determined the trajectory of the war’s brutal last year. Unquestionably, Hymns of the Republic is one of the most stirring Civil War books to appear in years.” —Peter Cozzens, author of The Earth Is Weeping: The Epic Story of the Indian Wars for the American West and Shenandoah 1862: Stonewall Jackson’s Valley Campaign

“With Hymns of the Republic, S.C. Gwynne has found the unthinkable: A fresh take on the Civil War. By compressing the narrative into the conflict's fraught and frantic last year, Gwynne breathes new life into a tale we thought we knew. Gwynne's carefully interwoven stories build upon each other like a Greek tragedy. Here, in vivid, muscular language, is the final unraveling of our most uncivil war.” —Hampton Sides, bestselling author of Ghost Soldiers and On Desperate Ground

“S.C. Gwynne's riveting book, Hymns of the Republic, finally made me realize that one cannot fully understand America without understanding the American Civil War. Gwynne's work is deeply researched and yet written like the best kind of fiction...it stopped me in my tracks. Gwynne has to be one of the very best writers working today.” —Sebastian Junger, author of Tribe and The Perfect Storm

“[Creating] suspense in recounting familiar events marks real talent in a historian; covering in detail events of the Civil War’s final year and giving his readers a real sense of wonder, even thrill. In vivid, bloody prose, [Gwynne] lays out the landscapes of the war’s culminating battles, not sparing the reader the gut punch of inhuman horror such slaughter creates.” —Booklist, starred review

“The acclaimed author of Empire of the Summer Moon and Rebel Yell drills down on the agonizingly slow, murderous crawl that was the last year of the Civil War. At this point in the conflict, all thoughts of the romance of war had been washed away by rivers of blood, leaving the players—Grant, Lee, Sherman, Lincoln, and, surprisingly but fittingly, Clara Barton—exposed and etched like the figures in a Greek tragedy.” —The Daily Beast