A Promise to Kill: A Clyde Barr Novel (Hardcover) 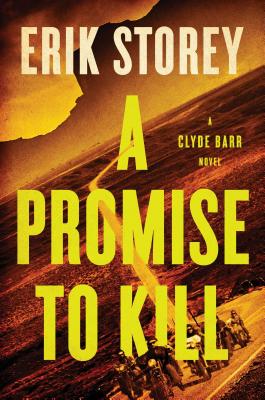 By Erik Storey
Unavailable. Orders will be auto-cancelled.

This is book number 2 in the A Clyde Barr Novel series.

From the author dubbed by Jeffery Deaver “a born storyteller” whose first novel Nothing Short of Dying was hailed as “exceptional,” “a rollercoaster read,” and “adrenaline-fueled” by publications on both sides of the Atlantic, this is Erik Storey’s next entry in the Clyde Barr series, a locomotive-paced brawler that has its hero teaming with besieged members of a Native American reservation to thwart outlaw bikers who are putting hundreds of thousands of lives at risk.

Clyde Barr, the drifter with lethal skills, is alone again, wandering the highways of the American West in search of something to believe in. As summer turns to autumn, he trades his car for a horse and heads for the mountains, planning to clear his head and regain his edge with some hunting. But when he runs across an elderly sick man—a Ute Indian from a nearby reservation—Clyde’s dream of solitude is quickly dashed.

On the reservation, Clyde finds the old man’s daughter, Lawana, and grandson, Taylor, as well as a group of menacing bikers called Reapers running wild in the economically depressed, half-abandoned village. Gripped by the desire to do good in a hard world, Clyde offers to stay on Lawana’s ranch to help out until her father is released from the hospital. He controls himself around the bikers, even when he sees them harass a few Native American women—but when the Reapers attack a local boy Clyde has to do something. As tensions rise between the locals and the Reapers, Clyde’s efforts to protect the reservation become a fight for his, Lawana’s, and Taylor’s lives. And then the stakes ratchet up even more.

In the remote Utah desert, surrounded by enemies, with no law enforcement presence, and with communication effectively cut off, Clyde must find a way to save his new friends, defeat the gang, and, hopefully, escape with his own skin intact. A Promise to Kill is an edge-of-the-seat thriller, pushing its no-hold-barred hero to new levels of improvisation and bare-knuckled blunt force.

“One of the best thrillers of the year . . . Extraordinarily well-written and well-crafted, A Promise To Kill is exciting, entertaining, plausible, realistic, and moves along flawlessly . . . This is a truly great thriller—so full of nail-biting suspense and surprises and fast-paced action that it actually is difficult to put down. Erik Story is not just a really good writer—he’s a great one.”
—Washington Times

"Nail-biting . . . Readers will  have a hard time putting this thriller down."
—Publishers Weekly

"[Features] a fantasy figure of immortal appeal: the loner who rides into a town in trouble, rescues the folks by pulverizing the troublemakers, and leaves, much to the disappointment of the townsfolk . . . Entertaining . . . especially for those come for the action."
—Booklist

"One of the summer's best mystery novels . . . A Sam Peckinpah via Peter Fonda motorcycle western, but with drones . . . [Storey] gives a high-country nod to the influence of legendary Florida mystery writer John D. MacDonald."
—Outside magazine

“You will be hard-pressed to find anything this year that approaches the quality of this . . . A Promise to Kill is a terrific novel with a timeless premise: a stranger wanders into a bad situation not of his making, kicks posterior, gets his own posterior kicked, and emerges from the other side, bloodied and bent but unbowed . . . This second novel meets and exceeds the promise of that work, with enough explosions, suspense and fisticuffs to fill three books with change left over. Naturally, I loved every word of it.”
—Book Reporter

"If you loved Erik Storey's debut novel Nothing Short of Dying as much as I did, then you're already hooked on this author, and it won't take much to convince you to read A Promise to Kill. Clyde Barr, Storey's iconic American hero/drifter, is saddled up and back. Barr never looks for trouble, but trouble is all around him in the rough country he travels, and Barr does not ride away from trouble—or evil. A Promise to Kill promises intense, edge-of-the-seat excitement to anyone who picks it up."

"Not just good but great. A Promise to Kill delivers on the promise of Story’s debut novel by showing protagonist Clyde Barr confronting even more insurmountable odds, and making the bad guys wish they’d stayed home. The Clyde Barr thrillers are my favorites, and Erik Storey is my favorite thriller writer. There's not even a close second."
—Benjamin Whitmer, author of Pike and Cry Father and coauthor of New York Times Editors’ Choice memoir Satan Is Real

"Clyde Barr's life is like being in one of those cities with no left turns, when no matter how many times you turn right, you can't get away.  He's a fascinating character, and Erik Storey is coming up fast as a writer.  He keeps the story moving, and keeps you caring. "
—James Sallis, Hammet Award-winning author of Drive (basis of the Cannes-winning film), The Killer Is Dying, and the Lew Griffin Series

“I loved it!  I couldn’t stop turning the pages. You don't read this book so much as you hold on and try to keep up. Clyde Barr is so tough I'm honestly a little afraid of Erik Storey right now."
—Rob Hart, author of New Yorked, City of Rose, South Village and The Woman from Prague

“I devoured A Promise to Kill in one sitting.  It takes off at escape velocity and never relents.  Do not mess with Clyde Barr.”
—Meg Gardiner, Edgar Award-winning author of China Lake, Phantom Instinct, and The Shadow Tracer

“The novel’s hero, Clyde Barr, is a throwback to Billy Jack or Jan Michael Vincent in the 1980 classic Defiance, a lone wolf who roams from town to town, settling temporarily where he is most needed. This time it’s an Indian reservation overrun by outlaw bikers, and Storey proves masterful at keeping the pages turning. Barr is a man who places morals over money, and honor above might; one who runs toward trouble, forever committed to fighting the good fight—the kind of man all little boys dream of being.”
—Joe Clifford, author of Lamentation, December Boys and Give Up the Dead