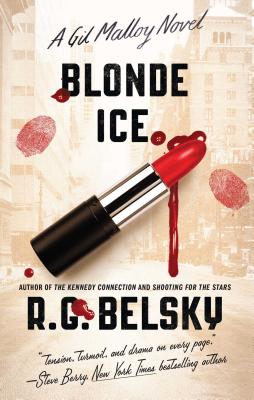 This is book number 4 in the The Gil Malloy Series series.

“Insightful and genuinely interesting characters, gritty atmospherics, and a wry sense of humor power the plot, which is filled with enough bombshell twists to keep readers guessing until the very last page.” —Publishers Weekly

“This excellent thriller....establishes Malloy as a formidable hard-boiled hero.” —Booklist

From the author of the “thought-provoking thriller” (Jan Burke) The Kennedy Connection comes a gripping mystery featuring crime-stopper and star Daily News reporter Gil Malloy who takes on his most explosive and exciting story yet—a blonde femme fatale in New York City who is killing men for thrills.

Son of Sam. Ted Bundy. The Boston Strangler. All of these infamous serial killers who made front page news shared a common trait—they were men who killed women for a sexual thrill.

But now Gil Malloy—ace reporter for the New York Daily News—is on the trail of a different kind of serial killer who breaks all of the rules. Dubbed “Blonde Ice” by the media, she’s a sexy blonde who picks up seemingly random men at bars and clubs, has sex with them, and then brutally murders them afterwards.

Malloy—who is already in the middle of a major political story about the election of the next New York City mayor—finds himself drawn to the case by secrets from his past. As he digs deeper, he begins to suspect that there could be some kind of link between the mayoral race and the emergence of the Blonde Ice killings.

As the body count and the political stakes continue to rise, Malloy soon realizes he’s covering what could be the biggest story of his career. All he has to do is live through it.

“There’s tension, turmoil, and drama on every page.  Belsky has a masterful talent for wordplay, one that holds you tight until all is revealed.  Blonde Ice is an intelligent and delectable treat for the mind.”
— Steve Berry, New York Times bestselling author

“Blonde Ice is white-hot.  Even better than its title is Dick Belsky’s thriller itself.  Read it and . . . burn, baby, burn!”
— Joe Eszterhas, screenwriter for "Basic Instinct" and New York Times bestselling author

"R.G. Belsky has written an engrossing atmospheric thriller set in the hardscrabble world of tabloid journalism. A world that's fast disappearing as we know it. Blonde Ice is a thoroughly gripping read that hits every high note then shocks you with one last twist."
— James W. Ziskin, Anthony-, Barry-, and Lefty-nominated author of the Ellie Stone Mysteries: Styx & Stone, No Stone Unturned, Stone Cold Dead, and Heart of Stone

“I think [Blonde Ice] is his best….such a thrill ride of a novel.”
— Scott Butki, MysteryPeople.com

“Gil’s rather unique personality made this book a lot of fun. The characterization of him stayed with him beautifully.”
— ErrantDreams.com

“Belsky has once again managed to keep the reader laughing (the blonde jokes are a great extra) while engrossed in a twisted thriller. Read all three previous Gil Malloy novels; you will have a blast!”
— Bunny Hand, Mysterious Galaxy Bookstore

“Suspenseful from start to finish . . . . leaves the reader wide-eyed and eager to start back from the beginning. An exhilarating read”
— Jonathan Nash, Killer Nashville