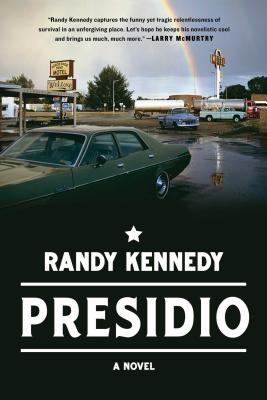 By Randy Kennedy
Unavailable. Orders will be auto-cancelled.

“A fluent, mordant, authentic, propulsive narrative wonderfully lit from within by an intriguing main character...The Texas of the novel...has been written about before, and very well. Kennedy rises to the challenge and succeeds so well that Larry McMurtry and James Lee Burke have offered their praise.”
—Lee Child, The New York Times Book Review

Set in the 1970s in the vast and arid landscape of the Texas panhandle, this darkly comic and stunningly mature literary debut tells the story of a car thief and his brother who set out to recover some stolen money and inadvertently kidnap a Mennonite girl who has her own reasons for being on the run.

Troy Falconer returns home after years of working as a solitary car thief to help his younger brother, Harlan, search for his wife, who has run away with the little money he had. When they steal a station wagon for the journey, the brothers accidentally kidnap Martha Zacharias, a Mennonite girl asleep in the back of the car. Martha turns out to be a stubborn survivor who refuses to be sent home, so together these unlikely road companions attempt to escape across the Mexican border, pursued by the police and Martha’s vengeful father.

The story is told partly through Troy’s journal, in which he chronicles his encounters with con artists, down-and-outers, and roadside philosophers, people looking for fast money, human connection, or a home long since vanished. The journal details a breakdown that has left Troy unable to function in conventional society; he is reduced to haunting motels, stealing from men roughly his size, living with their possessions in order to have none of his own and all but disappearing into their identities.

With a page-turning plot about a kidnapped child, gorgeously written scenes that probe the soul of the American West, and an austere landscape as real as any character, Presidio packs a powerful punch of anomie, dark humor, pathos, and suspense.

Randy Kennedy was born in San Antonio, Texas, and raised in Plains, a small farming town in the Texas Panhandle, where his father worked as a telephone lineman and his mother as a teachers’ aide. He was educated at the University of Texas at Austin. He moved to New York City in 1991 and worked for twenty-five years as a staff member and writer for The New York Times, first as a city reporter and for many years covering the art world. His first novel, Presidio, hailed as a "rich and rare book" by novelist Annie Proulx, was published in 2018 by Touchstone/Simon & Schuster. A collection of his city columns, Subwayland: Adventures in the World Beneath New York, was published in 2004. For The New York Times and The New York Times Magazine he has written about many of the most prominent artists of the last 50 years, including John Chamberlain, Claes Oldenburg, Bruce Nauman, Vito Acconci, Nan Goldin, Paul McCarthy and Isa Genzken. He is currently director of special projects for the international art gallery Hauser & Wirth. He lives in Brooklyn with his wife, Janet Krone Kennedy, a clinical psychologist, and their two children.

"A fluent, mordant, authentic, propulsive narrative wonderfully lit from within by an intriguing main character...The Texas of the novel...has been written about before, and very well.  Kennedy rises to the challenge and succeeds so well that Larry McMurtry and James Lee Burke have offered their praise."
— Lee Child, The New York Times Book Review

"Here is a rich and rare book. Reader, if you like poor Texas boys gone bad (or not bad enough), landscapes so accurate in detail you feel you grew up there, coldly logical Mennonite girls with outcast Manitoban-Mexican papas, magnetic details about old cars, the finer points of an automobile-thieving, and a magisterial use of italics you will want to read this novel through twice in a row as I did. It is a hard picture of the choices offered to poor Texas youths in the 1960s and ’70s. You might say it shakes out as a weird combination of Canterbury Tales, Breaking Bad and À la recherche du temps perdu with a dash of Confederacy of Dunces, but it is brilliantly original. You will laugh, you will cry and you will read it again straight through to enjoy the fine points of marvelous writing. There is nothing out there like Presidio."
—Annie Proulx, author of Barkskins

"Presidio is set in what I think of as Max Crawford Country—the bleak dreamscape around the edges of the Caprock, where life is, to say the least—gritty. Randy Kennedy captures the funny yet tragic relentlessness of survival in an unforgiving place. Let's hope he keeps his novelistic cool and brings us much, much more."
—Larry McMurtry

"Randy Kennedy writes wonderful prose. He combines the detail and eye of a journalist with the lyricism of a poet. If you want to read about the real deal down in Texas, he's your man."
—James Lee Burke, author of Robicheaux

"Randy Kennedy's Mexican-American frontier of the 1970s occupies the same dustblown landscape painted by Cormac McCarthy. Car thieves and drug dealers tumble together with Mennonites and luncheonette waitresses—all of them lightened by empty pockets, small dreams, and minimal futures. From these elements Kennedy assembles a gorgeously written narrative of outrunning violence and despair."
—Carol Anshaw, author of Carry the One

“A fabulous novel, executed in rare and exquisite language, about two brothers and the tough little girl, (one of the most engaging fictional heroines in recent memory), they accidentally encounter on a hapless journey across Texas to recover some stolen money. Kennedy is truly the literary heir to Cormac McCarthy in his depiction of the vivid characters and sparsely beautiful landscape of the American West.”
—Dinitia Smith, author of The Honeymoon

"An absolute marvel of a novel. Like a nesting doll, it continually uncovers stories within stories, each revealing the depth and humanity of its fascinating cast of characters. Kennedy has given us a wonderfully compelling portrait of the American West in the second half of the twentieth century, full of danger, humor, and surprises."
—Ian Stansel, author of The Last Cowboys of San Geronimo

"Like a herding rope, the plot unfolds in taut scenes juxtaposed with wonderful loops of description, flashback, and spare dialogue that occasionally swells into flashes of revelation, all of it grounded in a palpable sense of place.”

"Stunning....Kennedy is a masterful landscape builder, with descriptions so sharp it's hard not to taste the gas fumes."
— Interview Magazine

"With the right person at the wheel, some of the best road trips go nowhere in particular. Those winding up at a dead end can be most entertaining of all.  Count Randy Kennedy’s striking debut novel, “Presidio,” in that number. Set in the latter months of 1972, “Presidio” is first-rate Lone Star noir: haunted by fate, gritty with regret, told with dusty elegance and dark humor."
— Houston Chronicle

"Superb...Panhandle-bred Randy Kennedy so vividly captures the sprawling, flat, arid landscape of the High Plains as to practically render it a character in its own right, an omnipresent protagonist if you will....At its heart, this is a road story but by no means the exultant, romantic kind that Kerouac and Cassady shared. Like the fiendish terrain it traverses, this road is harsh, spiteful, and unforgiving. That said, Kennedy portrays it beautifully and populates it, however sparsely, with desperate yet sympathetic characters."
— Austin Chronicle

“A bleak rural American landscape, a family marked by tragedy, a pair of estranged brothers effecting a tentative rapprochement — we're talking about a play by the late Sam Shepard, right?... Actually, it's a debut novel by Randy Kennedy, former arts journalist for the New York Times… His characters are strangely beguiling, with their trundling through ‘the featureless geography of West Texas’ serving to magnify the hollowed-out nature of their inner selves.”

“Two estranged brothers and an unexpected passenger embark on a road trip through Texas to recover stolen money in this strong debut… Kennedy has a fertile imagination he lets drift into many beguiling detours, and the writing sparkles throughout.”
— Kirkus Reviews, starred review

"In this stellar debut....Kennedy soberly etches a Texas landscape of violence and despair as vividly as anything by Larry McMurtry."
— Publishers Weekly

“Kennedy employs a conversational and reflective tone as he skillfully explores the nature of guilt, identity, and grief in his assured debut. This deceptively polished confessional imbues the three-dimensional characters with humor, cynicism, and considerable pathos in artful contrast to the moonlike landscape of West Texas... For fans of Larry McMurtry and Philipp Meyer.”
— Booklist

"Kennedy creates a reality that blows desert dust into the eyes and cheap motel musk into the nostrils, successfully capturing the intertwining lives of sad sacks who are painfully and at times comically doomed. Those who enjoy classic Western "drifter dramas" will be sinfully satisfied."
— Library Journal

“Rendering a sparse land in rich detail, Kennedy writes West Texas as James Lee Burke writes New Iberia. Precise, economical word choices pack an emotional punch out of proportion to their brevity. . . . Presidio is a modern tale of the Old West, of life on the shifting margins with grifters and drifters, a peculiarly American restlessness.”
— Lone Star Literary

“The sentences that make up Presidio are lyrical and demonstrate an almost encyclopedic knowledge of the book’s world… Kennedy was a reporter for the New York Times for 25 years, so it comes as no surprise that he can write. There are also masterful moments of characterization… I truly look forward to seeing what he writes next.”

“Kennedy’s prose about the large hold of small places, the people as weather-beaten as the landscape, grabs you and refuses to relinquish its grip. Original and enthralling, “Presidio” is American realism in the vein of John Steinbeck and Stephen Crane… Rendering a sparse land in rich detail, Kennedy writes West Texas as James Lee Burke writes New Iberia… Precise, economical word choices pack an emotional punch out of proportion to their brevity.”