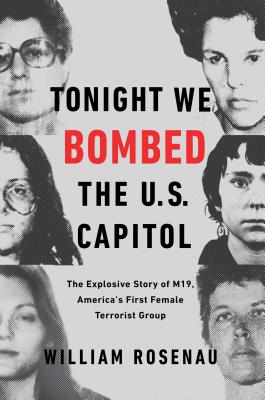 In a shocking, never-before-told story from the vaults of American history, Tonight We Bombed the US Capitol takes a close look at the explosive hidden history of M19—the first and only domestic terrorist group founded and led by women—and their violent fight against racism, sexism, and what they viewed as Ronald Reagan’s imperialistic vision for America.

In 1981, President Ronald Reagan announced that it was “morning in America.” He declared that the American dream wasn’t over, but the United States needed to lower taxes, shrink government control, and flex its military muscles abroad to herald what some called “the Reagan Revolution.” At the same time, a tiny band of American-born, well-educated extremists were working for a very different kind of revolution.

By the end of the 1970s, many radicals had called it quits, but six veteran women extremists came together to finish the fight. These women had spent their entire adult lives embroiled in political struggles: protesting the Vietnam War, fighting for black and Native American liberation, and confronting US imperialism. They created a new organization to wage their war: The May 19th Communist Organization, or “M19,” a name derived from the birthday shared by Malcolm X and Ho Chi Minh, two of their revolutionary idols. Together, these six women carried out some of the most daring operations in the history of domestic terrorism—from prison breakouts and murderous armed robberies, to a bombing campaign that wreaked havoc on the nation’s capital. Three decades later, M19’s actions and shocking tactics still reverberate for many reasons, but one truly sets them apart: unlike any other American terrorist group before or since, M19 was created and led by women.

Tonight We Bombed the US Capitol tells the full story of M19 for the first time, alongside original photos and declassified FBI documents. Through the group’s history, intelligence and counterterrorism expert William Rosenau helps us understand how homegrown extremism—a threat that still looms over us today—is born.

William Rosenau, PhD, is a senior research scientist at CNA, a nonprofit research and analysis organization, and a fellow in the International Security program at New America. His articles have been published in The New York Times, The Wall Street Journal, and The Atlantic. He has appeared on CNN, BBC World News, and elsewhere. He lives in Washington, DC.

“I was blown away. Tonight We Bombed the U.S. Capitol is simply one of the most entertaining and intriguing books I’ve read in quite some time.”
— Sean McFate, author of The New Rules of War

“Bill Rosenau has unearthed the extraordinary tale of a group of ordinary American women who became terrorists and went to war against the United States government. It’s a deeply researched and well-written account of a group of true believers who waged a terrifying terrorist campaign in America.”
— Peter Bergen, author of United States of Jihad

“Terrorism has a long history in the United States. And no one has done a better job than William Rosenau in recounting one of its more fascinating episodes—the bombing campaign waged by a terrorist group of white American women known as M19. Tonight We Bombed the U.S. Capitol is a gripping account of this hitherto forgotten terrorist campaign that culminated in the 1983 attack on our most revered edifices. Rosenau has produced the authoritative account of the group, its members, operations, and consequences.”
— Bruce Hoffman, author of Inside Terrorism and professor, Georgetown University

“This book is a journey both delightful and horrifying through a story that was never even remembered by most, much less forgotten. Anyone interested in terrorism and the modern security state, or just a good yarn, will love this book.”
— Ryan Evans, CEO and editor in chief of War on the Rocks and publisher of Texas National Security Review

“William Rosenau’s Tonight We Bombed the U.S. Capitol is . . . a reminder that, while right-wing extremism may be plaguing our nation now, there was a time when the left was just as dangerous. And far more invisible.”
— NY Daily News

"The author relies on skilled, detailed research to outline both the goals and violent practices of the revolutionaries... An intriguing history that holds relevance to domestic terrorism in our current era."

"This fascinating chronicle of a dark slice of American history deserves a wide audience. "

"Written by counterterrorism expert and former RAND political scientist William Rosenau, Tonight We Bombed the U.S. Capitol tells the compelling and sobering tale of M19 with hardly a hint of the sensationalism its bombastic title promises. . . . It’s to Rosenau’s credit that his account of deeply sobering political violence proves consistently compelling without ever striving to titillate, exploit, or entertain."
— New York Journal of Books