Einstein's Fridge: How the Difference Between Hot and Cold Explains the Universe (Paperback) 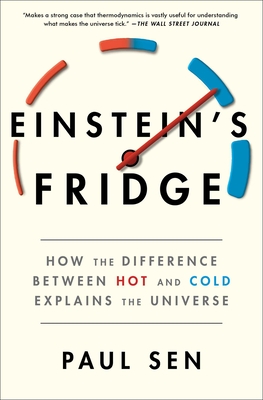 This entertaining, eye-opening account of how the laws of thermodynamics are essential to understanding the world today—from refrigeration and jet engines to calorie counting and global warming—is “a lesson in how to do popular science right” (Kirkus Reviews).

Einstein’s Fridge tells the incredible epic story of the scientists who, over two centuries, harnessed the power of heat and ice and formulated a theory essential to comprehending our universe. “Although thermodynamics has been studied for hundreds of years…few nonscientists appreciate how its principles have shaped the modern world” (Scientific American). Thermodynamics—the branch of physics that deals with energy and entropy—governs everything from the behavior of living cells to the black hole at the center of our galaxy. Not only that, but thermodynamics explains why we must eat and breathe, how lights turn on, the limits of computing, and how the universe will end.

The brilliant people who decoded its laws came from every branch of the sciences; they were engineers, physicists, chemists, biologists, cosmologists, and mathematicians. From French military engineer and physicist Sadi Carnot to Lord Kelvin, James Joule, Albert Einstein, Emmy Noether, Alan Turing, and Stephen Hawking, author Paul Sen introduces us to all of the players who passed the baton of scientific progress through time and across nations. Incredibly driven and idealistic, these brave pioneers performed groundbreaking work often in the face of torment and tragedy. Their discoveries helped create the modern world and transformed every branch of science, from biology to cosmology.

“Elegantly written and engaging” (Financial Times), Einstein’s Fridge brings to life one of the most important scientific revolutions of all time and captures the thrill of discovery and the power of scientific progress to shape the course of history.

Paul Sen first encountered thermodynamics while studying engineering at the University of Cambridge. He became a documentary filmmaker with a passion for communicating profound scientific ideas in an engaging and accessible way to a wide audience with landmark TV series such as Triumph of the Nerds and Atom. These brought a love of storytelling to the worlds of science and technology. Paul’s award-winning TV company Furnace, where he is creative director, has made BBC science series such as Everything and Nothing, Order and Disorder, The Secrets of Quantum Physics, and ninety-minute films such as Gravity and Me: The Force That Shapes Our Lives and Oak Tree: Nature’s Greatest Survivor. This won the prestigious Royal Television Society Award for best science and natural history program and the Grierson Award for best science documentary in 2016. Einstein’s Fridge is born out of Paul’s conviction that the history of science is the history that matters.

“[An] elegantly written and engaging book. . . . It’s a measure of Sen’s achievement that by combining science, history and biography he takes us on a successful tour through thermodynamics.” —Financial Times

“Makes a strong case that thermodynamics is every bit as lively as those other fields—and vastly more useful for understanding what makes the universe tick. . . . Thermodynamics does not bow to other fields; other fields bow to it.” —The Wall Street Journal

"An entertaining, eye-opening account of the extraordinary team of innovators who discovered the laws of thermodynamics essential to understanding the world today—from refrigeration and jet engines to calorie counting and global warming." —Next Big Idea Club

“Superb. . . . Einstein’s Fridge offers an accessible and crystal-clear portrait of this discipline’s breadth. . . . [the book] wanders widely while never losing its connection to the central theme. . . . splendid.” —Physics World

“Sen performs an exquisite examination of an ostensibly simple distinction, the difference between hot and cold.” —Booklist

“Although thermodynamics has been studied for hundreds of years, filmmaker Sen writes, few nonscientists appreciate how its principles have shaped the modern world.”  —Scientific American

“I am grateful for Paul Sen’s fascinating new scientific history of thermodynamics—now I can explain my son’s two favorite things: fire and ice.”  —Jonny Diamond, LitHub

“A lesson in how to do popular science right.” —Kirkus Reviews

“When you combine some of the most profound concepts in physics with exceptional storytelling, this is what you get: popular science writing at its very best. Einstein’s Fridge is a hugely readable and entertaining history of thermodynamics and how it has created and shaped our world.” —Jim Al-Khalili, author of The World According to Physics

“Impressive debut. . . . Sen’s history of hot and cold is pop-science that hits the mark.” —Publishers Weekly