A Promise to Kill: A Clyde Barr Novel (Mass Market) 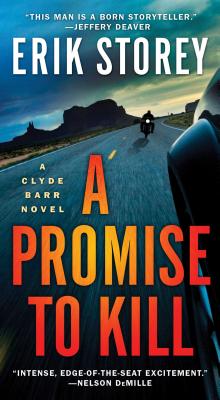 By Erik Storey
$9.99
Backordered. Place an order and we will let you know when to expect your book.

This is book number 2 in the A Clyde Barr Novel series.

Clyde Barr returns in “one of the best thrillers of the year” (The Washington Times) that “promises intense, edge-of-the-seat excitement to anyone who picks it up” (Nelson DeMille).

Clyde Barr, the drifter with lethal skills, is alone again, wandering the highways of the American West in search of something to believe in. As summer turns to autumn, he trades his car for a horse and heads for the mountains, planning to clear his head and regain his edge with some hunting. But when he runs across an elderly sick man—a Ute Indian from a nearby reservation—Clyde’s dream of solitude is quickly dashed.

On the reservation, Clyde finds the old man’s daughter, Lawana, as well as a group of menacing bikers called the Reapers running wild in the economically depressed, half-abandoned village. Gripped by the desire to do good in a bleak world, Clyde offers to stay on Lawana’s ranch to help out until her father is released from the hospital. He controls himself around the bikers, even when he sees them harass a few Native American women—but when the Reapers attack a local boy Clyde has to do something. As tensions rise between the locals and the Reapers, Clyde’s efforts to protect the reservation become a fight for his and Lawana’s lives. And then the stakes ratchet up even more.

A Promise to Kill is the edge-of-the-seat sequel to Nothing Short of Dying that “readers will have a hard time putting…down” (Publishers Weekly).

“One of the best thrillers of the year. . . Extraordinarily well-written and well-crafted, A Promise to Kill is exciting, entertaining, plausible, realistic, and moves along flawlessly…This is a truly great thriller—so full of nail-biting suspense and surprises and fast-paced action that it actually is difficult to put down. Erik Story is not just a really good writer—he’s a great one.”
— The Washington Times

“One of the summer’s best mystery novels…A Sam Peckinpah via Peter Fonda motorcycle western, but with drones….[Storey] gives a high-country nod to the influence of legendary Florida mystery ­writer John D. MacDonald.”
— Outside

“Nail-biting . . . Readers will have a hard time putting this thriller down.”
— Publishers Weekly

“You will be hard-pressed to find anything this year that approaches the quality of this…A Promise to Kill is a terrific novel with a timeless premise: a stranger wanders into a bad situation not of his making, kicks posterior, gets his own posterior kicked, and emerges from the other side, bloodied and bent but unbowed…[Erik Storey's] second novel meets and exceeds the promise of that work, with enough explosions, suspense and fisticuffs to fill three books with change left over. Naturally, I loved every word of it.”
— Joe Hartlaub, Bookreporter