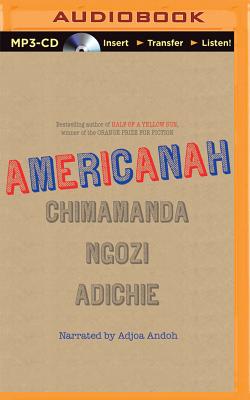 By Chimamanda Ngozi Adichie, Adjoa Andoh (Read by)
$15.99
Out of Stock; Usually Arrives in 5-7 Days

One of The New York Times's Ten Best Books of the Year
Winner of the National Book Critics Circle Award for Fiction
An NPR "Great Reads" Book, a Chicago Tribune Best Book, a Washington Post Notable Book, a Seattle Times Best Book, an Entertainment Weekly Top Fiction Book, a Newsday Top 10 Book, and a Goodreads Best of the Year pick

As teenagers, Ifemelu and Obinze fall in love in a Nigeria under military dictatorship. The self-assured Ifemelu departs for America, where Obinze hopes to join her, but post-9/11 America will not let him in, and he plunges into a dangerous, undocumented life in London. Fifteen years later, after so long apart and so many changes, will they find the courage to meet again, face to face?