A Pillar of Iron: A Novel of Ancient Rome (Paperback) 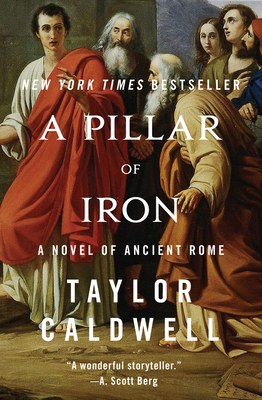 New York Times Bestseller: A magnificent novel of ancient Rome and the tragic life of Cicero, who tried in vain to save the republic he loved from tyranny. In this riveting tale, the Roman Empire in its final glory is seen through the eyes of philosopher, orator, and political theorist Marcus Tullius Cicero. From his birth in 106 BC in the hill town of Arpinum, Cicero, the educated son of a wealthy member of the equestrian order, is destined for greatness. At a young age, he discovers the legend of the Unknown God, the coming Messiah, and it propels the rising lawyer on a journey of spiritual conflict and self-discovery. From his tumultuous family life to his tenuous alliance with Julius Caesar to a fateful love affair with the Roman empress Livia and, finally, to the political role that will make him a target of powerful enemies, A Pillar of Iron is the story of Cicero's legacy as one the greatest influences on Western civilization. Based on hundreds of speeches, voluminous private correspondence, and ancient texts and manuscripts, this bestselling epic brings into focus Cicero's complicated relationships with his contemporaries, including Caesar, Mark Antony, and Crassus, and brilliantly captures the pageantry, turmoil, and intrigue of life in ancient Rome. According to legendary editor Maxwell Perkins, author "Taylor Caldwell is a storyteller first, last and foremost, and once you begin reading one of her books, you can't help finishing it.

Taylor Caldwell was one of the most prolific and widely read authors of the twentieth century. Born Janet Miriam Holland Taylor Caldwell in 1900 in Manchester, England, she moved with her family to Buffalo, New York, in 1907. She started writing stories when she was eight years old and completed her first novel when she was twelve. Married at age eighteen, Caldwell worked as a stenographer and court reporter to help support her family and took college courses at night, earning a bachelor of arts degree from the University of Buffalo in 1931. She adopted the pen name Taylor Caldwell because legendary editor Maxwell Perkins thought her debut novel, Dynasty of Death (1938), would be better received if readers assumed it were written by a man. In a career that spanned five decades, Caldwell published forty novels, many of which were New York Times bestsellers. Her best-known works include the historical sagas The Sound of Thunder (1957), Testimony of Two Men (1968), Captains and the Kings (1972), and Ceremony of the Innocent (1976), and the spiritually themed novels The Listener (1960) and No One Hears But Him (1966). Dear and Glorious Physician (1958), a portrayal of the life of St. Luke, and Great Lion of God (1970), about the life of St. Paul, are among the bestselling religious novels of all time. Caldwell's last novel, Answer as a Man (1981), hit the New York Times bestseller list before its official publication date. She died at her home in Greenwich, Connecticut, in 1985.