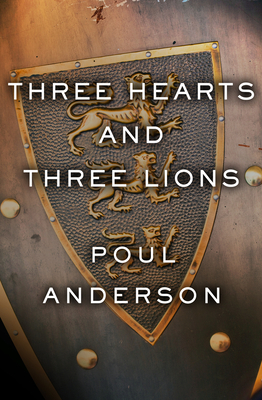 Transported to a medieval realm of magic and myth, a World War II resistance fighter undertakes a perilous quest in this classic fantasy adventure.

Holger Carlsen is a rational man of science. A Danish engineer working with the Resistance to defeat the Nazis, he is wounded during an engagement with the enemy and awakens in an unfamiliar parallel universe where the forces of Law are locked in eternal combat with the forces of Chaos. Against a medieval backdrop, brave knights must take up arms against magical creatures of myth and faerie, battling dragons, trolls, werewolves, and giants.

Though Holger has no recollection of this world, he discovers he is already well-known throughout the lands, a hero revered as a Champion of Law. He finds weaponry and armor awaiting him--precisely fitted to his form--and a shield with three hearts and three lions emblazoned upon it. As he journeys through a realm filled with wonders in search of the key to his past, Holger will call upon the scientific knowledge of his home dimension, the destinies of both worlds hanging in the balance.

Before Thomas Covenant, Roger Zelazny's Amber, and J. R. R. Tolkien's The Lord of the Rings, the great Poul Anderson introduced readers to the Middle World and the legendary hero Ogier the Dane. Inventive and exciting, Three Hearts and Three Lions is a foray into fantasy that employs touches of science fiction from an award-winning master of the speculative.

Poul Anderson (1926-2001) grew up bilingual in a Danish American family. After discovering science fiction fandom and earning a physics degree at the University of Minnesota, he found writing science fiction more satisfactory. Admired for his "hard" science fiction, mysteries, historical novels, and "fantasy with rivets," he also excelled in humor. He was the guest of honor at the 1959 World Science Fiction Convention and at many similar events, including the 1998 Contact Japan 3 and the 1999 Strannik Conference in Saint Petersburg, Russia. Besides winning the Hugo and Nebula Awards, he has received the Gandalf, Seiun, and Strannik, or "Wanderer," Awards. A founder of the Science Fiction & Fantasy Writers of America, he became a Grand Master, and was inducted into the Science Fiction and Fantasy Hall of Fame. In 1952 he met Karen Kruse; they married in Berkeley, California, where their daughter, Astrid, was born, and they later lived in Orinda, California. Astrid and her husband, science fiction author Greg Bear, now live with their family outside Seattle.