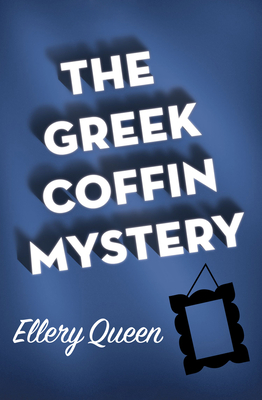 The "intensely logical" master sleuth discovers a crowded coffin in one of his earliest and most puzzling cases (The New York Times).

The scion of a famous New York art-dealing family, Georg Khalkis spent his final years housebound with blindness until he died of a heart attack. After his funeral, his will mysteriously vanishes. Following a thorough search, Inspector Richard Queen's son, Ellery, suggests checking the coffin, where they discover not one, but two corpses.

When the second body is identified as an ex-convict, it becomes clear they have a murder case on their hands with links to the art world and a da Vinci forgery. It's up to young Ellery Queen to solve the case in "a lively and well-constructed yarn containing unusual setting, ingenuity of plot, a surprise solution and legitimate use of the analytico-deductive method" (New York Herald Tribune Book Review).

Ellery Queen was a pen name created and shared by two cousins, Frederic Dannay (1905-1982) and Manfred B. Lee (1905-1971), as well as the name of their most famous detective. Born in Brooklyn, they spent forty-two years writing, editing, and anthologizing under the name, gaining a reputation as the foremost American authors of the Golden Age "fair play" mystery. Although eventually famous on television and radio, Queen's first appearance came in 1928, when the cousins won a mystery-writing contest with the book that was later published as The Roman Hat Mystery. Their character was an amateur detective who uses his spare time to assist his police inspector uncle in solving baffling crimes. Besides writing the Queen novels, Dannay and Lee cofounded Ellery Queen's Mystery Magazine, one of the most influential crime publications of all time. Although Dannay outlived his cousin by nine years, he retired Queen upon Lee's death.