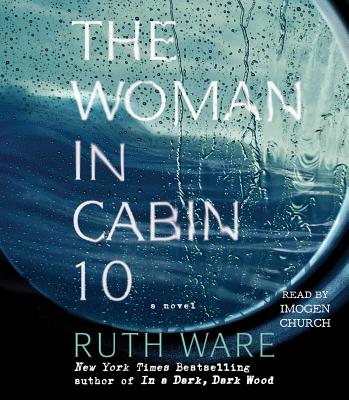 By Ruth Ware, Imogen Church (Read by)
Email or call for price
Hard to Find

“When journalist Lo Blacklock sees someone throw a woman's body over the side of a small cruise ship, it should be clear that a crime has been committed. The problem? No one is missing. This is far from the travel magazine assignment that brought Lo on board, but she can't just give up. Something happened and she must find the answer. But can she do so without losing her own life? This is a fun read full of psychological thrills and twists that readers absolutely will not see coming.”
— Linda Bond (E), Auntie's Bookstore, Spokane, WA

From New York Times bestselling author, Ruth Ware comes The Woman in Cabin 10, a suspenseful and haunting novel—set at sea.

In this tightly wound, enthralling story reminiscent of Agatha Christie’s works, Lo Blacklock, a journalist who writes for a travel magazine, has just been given the assignment of a lifetime: a week on a luxury cruise with only a handful of cabins. The sky is clear, the waters calm, and the veneered, select guests jovial as the exclusive cruise ship, the Aurora, begins her voyage in the picturesque North Sea.

At first, Lo’s stay is nothing but pleasant, but as the week wears on, frigid winds whip the desk, gray skies fall, and Lo witnesses what she can only describe as a dark and terrifying nightmare: a woman being thrown overboard. The problem? All passengers remain accounted for—and so, the ship sails on as if nothing has happened, despite Lo’s desperate attempts to convey that something (or someone) has gone terribly, terribly wrong...

With surprising twists, spine-tingling turns, and a setting that proves as uncomfortably claustrophobic as it is eerily beautiful, Ruth Ware offers up another taut and intense read in The Woman in Cabin 10—one that will leave even the most sure-footed reader restlessly uneasy long after the last page is turned.

Ruth Ware worked as a waitress, a bookseller, a teacher of English as a foreign language, and a press officer before settling down as a full-time writer. She now lives with her family in Sussex, on the south coast of England. She is the #1 New York Times and Globe and Mail (Toronto) bestselling author of In a Dark, Dark Wood, The Woman in Cabin 10, The Lying Game, The Death of Mrs. Westaway, and The Turn of the Key. Visit her at RuthWare.com or follow her on Twitter @RuthWareWriter.