How Schools Work: An Inside Account of Failure and Success from One of the Nation's Longest-Serving Secretaries of Education (Compact Disc) 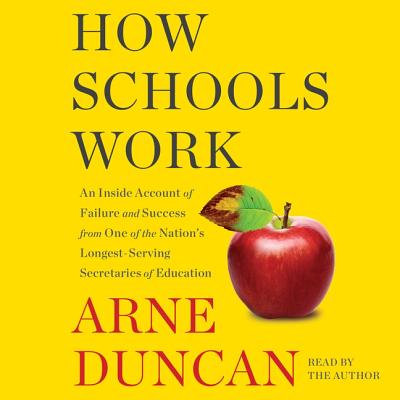 By Arne Duncan (Read by)
$29.99
It's complicated, and may be unavailable. Place an order and we will contact you with the expected arrival date.

From the secretary of education under President Obama, an expose of the status quo that helps maintain a broken system at the expense of our kids' education

Education runs on lies. That's probably not what you'd expect from a former secretary of education, but it's the truth. So opens Arne Duncan's How Schools Work, although the title could just as easily be How American Schools Work for Some, Not for Others, and Only Now and Then for Kids.

Drawing on nearly three decades in education-from his mother's after-school program on Chicago's South Side to his tenure as secretary of education in DC-How Schools Work follows Arne (as he insists you call him) as he takes on challenges at every turn: gangbangers in Chicago housing projects, parents who call him racist, teachers who insist they can't help poor kids, unions that refuse to modernize, Tea Partiers who call him an autocrat, affluent white progressive moms who hate yearly tests, and even the NRA, which once labeled Arne the most extreme anti-gun member of President Obama's cabinet. Going to a child's funeral every couple of weeks, as he did when he worked in Chicago, will do that to a person.

How Schools Work exposes the lies that have caused American kids to fall behind their international peers, from early childhood all the way to college graduation rates. But it also celebrates the countless everyday heroes Arne has encountered along the way: teachers, principals, reformers, staffers, business people, mayors, and presidents.

How Schools Work will inspire parents, teachers, voters, and even students to demand more of our public schools. If America is going to be great, then we can accept nothing less.