The Computer's Voice: From Star Trek to Siri (Paperback) 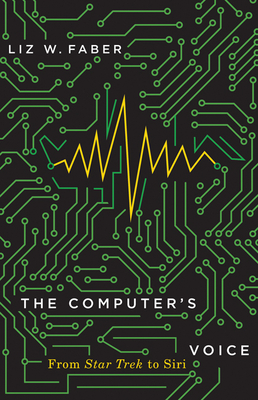 A deconstruction of gender through the voices of Siri, HAL 9000, and other computers that talk

Although computer-based personal assistants like Siri are increasingly ubiquitous, few users stop to ask what it means that some assistants are gendered female, others male. Why is Star Trek’s computer coded as female, while HAL 9000 in 2001: A Space Odyssey is heard as male? By examining how gender is built into these devices, author Liz W. Faber explores contentious questions around gender: its fundamental constructedness, the rigidity of the gender binary, and culturally situated attitudes on male and female embodiment.

Faber begins by considering talking spaceships like those in Star Trek, the film Dark Star, and the TV series Quark, revealing the ideologies that underlie space-age progress. She then moves on to an intrepid decade-by-decade investigation of computer voices, tracing the evolution from the masculine voices of the ’70s and ’80s to the feminine ones of the ’90s and ’00s. Faber ends her account in the present, with incisive looks at the film Her and Siri herself.

Going beyond current scholarship on robots and AI to focus on voice-interactive computers, The Computer’s Voice breaks new ground in questions surrounding media, technology, and gender. It makes important contributions to conversations around the gender gap and the increasing acceptance of transgender people.

"In this elegant book, Liz W. Faber plays intellectual alchemist, swirling methodologies to unearth the roots of our sociological interactions with digital technologies via the auditory, and not merely the visual domain. The Computer’s Voice furthers our belated attention to the soundtrack, both of our media texts but also our lived experience, by deftly deploying feminist theories of (dis)embodiment."—Walter Metz, Southern Illinois University

"Liz W. Faber has written a highly accessible and fascinating history of talking computers, from evil sci-fi mainframes to the smartphones we keep in our pockets. This deep dive into computing, vocalization, and gender explains how the digitized voices we often take for granted have a hidden history and politics all their own."—Mar Hicks, author of Programmed Inequality: How Britain Discarded Women Technologists and Lost Its Edge in Computing

"The Computer’s Voice is an ambitious theoretical project, but also a well-argued and informative interdisciplinary study of the intersections between popular culture, gender, and computer history."—Ancillary Review

"Faber's grasp of computer vocalizing as an instrument not only of humanizing technology but also of ‘genderizing’ discourse allows her to consider myriad aspects of sentient ‘computer life.’"—CHOICE