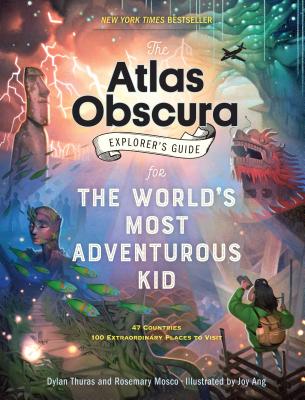 "For the world's most adventurous kid or just the most curious, here's a world of wonders to explore. From towering treehouses to rainbow colored rivers, these 100 marvels have been carefully chosen to spark wanderlust and inspire readers to up their adventure game."

The Atlas Obscura Explorer’s Guide for the World’s Most Adventurous Kid is a thrilling expedition to 100 of the most surprising, mysterious, and weird-but-true places on earth.

For curious kids, this is the chance to embark on the journey of a lifetime—and see how faraway countries have more in common than you might expect! Hopscotch from country to country in a chain of connecting attractions: Explore Mexico’s glittering cave of crystals, then visit the world’s largest cave in Vietnam. Peer over a 355-foot waterfall in Zambia, then learn how Antarctica’s Blood Falls got their mysterious color. Or see mysterious mummies in Japan and France, then majestic ice caves in both Argentina and Austria.

As you climb mountains, zip-line over forests, and dive into oceans, this book is your passport to a world of hidden wonders, illuminated by gorgeous art.

Dylan Thuras is the cofounder and creative director of Atlas Obscura. He lives in Rosendale, NY.
Rosemary Mosco is a science communicator, acclaimed cartoonist, and speaker on all things bird. She's the creator of the webcomic Bird and Moon and has authored many science books for young people, including co-authoring the bestselling Atlas Obscura Explorer’s Guide for the World’s Most Adventurous Kid. She lives in Massachusetts.
Atlas Obscura is the definitive guide to the world’s hidden wonders. Based on the community-driven, editor-curated website atlasobscura.com, Atlas Obscura uncovers unusual and overlooked places not found in your average guidebook. Cofounders Joshua Foer and Dylan Thuras are two of the authors of the # 1 New York Times bestselling book Atlas Obscura: An Explorer’s Guide to the World’s Hidden Wonders.
Joy Ang is a freelance artist, children’s book illustrator, and character designer for video games and the animated television series Adventure Time. She lives in Seattle.

"Hey kids: Geography can be fun! At least when it involves an illustrated guide to 100 magical destinations, including the Waitomo Glowworm Caves of New Zealand and South Africa’s Boulders Penguin Colony. Just don’t blame us if next year the little ones ask for a round-trip ticket to Ethiopia’s Lava Lakes."—The Washington Post

“Curiosity is both a must and a given. The tone is consistently upbeat but not melodramatic, giving the oddments a sense of reality rather than fantasy—that you could go and witness these phenomena yourself. One delectable sampler of wonders, there for the asking.”—Kirkus

★ “This unique atlas impresses the interconnectedness of the world upon readers, stoking their sense of respect, wonder, and opportunity.”—Booklist,Starred Review

"This full-color guide to a trip around the world features some of the most remarkable and mysterious places on Earth." — Shelf Awareness