A Field Guide to Lies: Critical Thinking in the Information Age (CD-Audio) 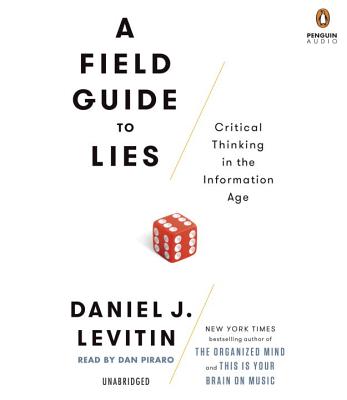 By Daniel J. Levitin, Dan Piraro (Read by)
Unavailable. Orders will be auto-cancelled.

From the New York Times bestselling author of The Organized Mind and This Is Your Brain on Music, a primer to the critical thinking that is more necessary now than ever

We are bombarded with more information each day than our brains can process—especially in election season. It's raining bad data, half-truths, and even outright lies. New York Times bestselling author Daniel J. Levitin shows how to recognize misleading announcements, statistics, graphs, and written reports, revealing the ways lying weasels can use them.

It's becoming harder to separate the wheat from the digital chaff. How do we distinguish misinformation, pseudo-facts, and distortions from reliable information? Levitin groups his field guide into two categories—statistical information and faulty arguments—ultimately showing how science is the bedrock of critical thinking. Infoliteracy means understanding that there are hierarchies of source quality and bias that variously distort our information feeds via every media channel, including social media. We may expect newspapers, bloggers, the government, and Wikipedia to be factually and logically correct, but they so often aren't. We need to think critically about the words and numbers we encounter if we want to be successful at work, at play, and in making the most of our lives. This means checking the plausibility and reasoning—not passively accepting information, repeating it, and making decisions based on it. Readers learn to avoid the extremes of passive gullibility and cynical rejection. Levitin's charming, entertaining, accessible guide can help anyone wake up to a whole lot of things that aren't so. And catch some weasels in their tracks!

Daniel J. Levitin, Ph.D., is Founding Dean of Arts & Humanities at the Minerva Schools at KGI, a Distinguished Faculty Fellow at the Haas School of Business, UC Berkeley, and the James McGill Professor Emeritus of Psychology and Music at McGill University, Montreal, where he also holds appointments in the Program in Behavioural Neuroscience, The School of Computer Science, and the Faculty of Education. An award-winning scientist and teacher, he now adds best-selling author to his list of accomplishments as This Is Your Brain on Music , The World in Six Songs and The Organized Mind were #1 best-sellers. His work has been translated into 21 languages. Before becoming a neuroscientist, he worked as a session musician, sound engineer, and record producer working with artists such as Stevie Wonder and Blue Oyster Cult. He has published extensively in scientific journals as well as music magazines such as Grammy and Billboard. Recent musical performances include playing guitar and saxophone with Sting, Bobby McFerrin, Rosanne Cash, David Byrne, Cris Williamson, Victor Wooten, and Rodney Crowell.

“Daniel Levitin’s field guide is a critical thinking primer for our shrill, data-drenched age. It’s an essential tool for really understanding the texts, posts, tweets, magazines, newspapers, podcasts, op-eds, interviews and speeches that bombard us every day.  From the way averages befuddle to the logical fallacies that sneak by us, every page is enlightening.”—Charles Duhigg, author of The Power of Habit and Smarter, Faster, Better

“The world is awash with data, but not always with accurate information. A Field Guide to Lies does a terrific job of illustrating the difference between the two with precision—and delightful good humor.”—Charles Wheelan, Senior Lecturer and Policy Fellow, Rockefeller Center, Dartmouth College, author of Naked Economics

“A Field Guide to Lies by the neuroscientist Daniel Levitin lays out the many ways in which each of us can be fooled and misled by numbers and logic, as well as the modes of critical thinking we will need to overcome this.”—The Wall Street Journal

“Valuable tools for anyone willing to evaluate claims and get to the truth of the matter.”—Kirkus Reviews

“This useful, entertaining, and highly readable guide is ready to arm everyday citizens with the tools to combat the spread of spurious, and often ridiculous, information.”—Library Journal

“[A] book you may want to have close by at all times.”—Success Magazine

“[A Field Guide to Lies] serves as a kind of Strunk & White for sloppy thinkers.”—New York Journal of Books

“Entertaining and filled with helpful hints, A Field Guide to Lies is a valuable tool for navigating the daily data onslaught.”—San Jose Mercury News

“[S]mart and humorous…the tools anyone needs to tell good information from bad are in this definitive guide to critical thinking.”—Shelf Awareness

“This is a wonderful book. It covers so many of the insights of science, logic, and statistics that the public needs to know, yet are sadly neglected in the education that most of us receive.”—Edward K. Cheng, Tarkington Chair of Teaching Excellence and professor of law at Vanderbilt Law School

“Hits on the most important issues around statistical literacy, and uses good examples to illustrate its points.  I could not put this book down.  Reading it has been a pleasure, believe me.  I am so impressed with Levitin's writing style, which is clear and simple, unlike much of the murky stuff that is written by statisticians and many others.”—Morris Olitsky, former Vice President, Market Research and Analysis, Prudential Financial, Statistician, U.S.D.A.

“Just as Strunk and White taught us how to communicate better, the Field Guide to Lies is an indispensable guide to thinking better.  As Big Data becomes a dominant theme in our culture, we are all obliged to sharpen our critical thinking so as to thwart the forces of obfuscation.  Levitin has done a great service here.”—Jasper Rine, Professor of Genetics, Genomics, and Development, UC Berkeley

“Not since Huff's classic How to Lie with Statistics has a book so clearly described how numbers can be used to deceive and misdirect. Levitin shows how to critically evaluate claims that charlatans, the media, and politicians would have us believe.”—Stan Lazic, Team Leader in Quantitative Biology at AstraZeneca

“A must read! Professor Levitin convinces the reader why  critical thinking has become even more crucial in the Information Age. As we are consistently bombarded with information, let’s question its veracity and acquire the tools to analyze it.”—Isabelle Bajeux-Besnainou, Dean and Professor of Finance, Desautels Faculty of Management , McGill University

“Well researched, and provides a valuable guide to assist the public with a methodology for evaluating the truth behind this cacophony of information that constantly inundates.”—Patrick Martin, Magician

“[A] valuable primer on critical thinking that convincingly illustrates the prevalence of misinformation in everyday life.”—Publisher's Weekly