Two Can Keep a Secret (Hardcover) 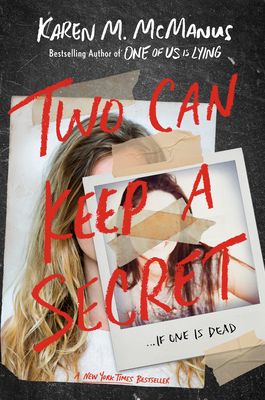 "From the bestselling author of One of Us Is Lying comes a twisty, intergenerational murder mystery set in an insular small town. The twists and turns of this YA thriller are sure to leave you captivated, and the small cast of characters is perfect for this take on the classic whodunit. This book offers the perfect mix of mystery and teen drama for fans of e. Lockhart’s We Were Liars or Stephanie Perkins There’s Someone Inside Your House."

The "must-read YA thriller" (Bustle) from #1 New York Times bestselling author of One of Us Is Lying about a small town with deadly secrets.

"When it comes to YA suspense, Karen M. McManus is in a league of her own..." --Entertainment Weekly

Echo Ridge is small-town America. Ellery's never been there, but she's heard all about it. Her aunt went missing there at age seventeen. And only five years ago, a homecoming queen put the town on the map when she was killed. Now Ellery has to move there to live with a grandmother she barely knows.

The town is picture-perfect, but it's hiding secrets. And before school even begins for Ellery, someone has declared open season on homecoming, promising to make it as dangerous as it was five years ago. Then, almost as if to prove it, another girl goes missing.

Ellery knows all about secrets. Her mother has them; her grandmother does too. And the longer she's in Echo Ridge, the clearer it becomes that everyone there is hiding something. The thing is, secrets are dangerous--and most people aren't good at keeping them. Which is why in Echo Ridge, it's safest to keep your secrets to yourself.

Fans of the hit thriller that started it all can watch the secrets of the Bayview Four be revealed in the One of Us is Lying TV series now streaming on NBC's Peacock!

Karen M. McManus earned her BA in English from the College of the Holy Cross and her MA in journalism from Northeastern University. She is the #1 New York Times bestselling author of One of Us Is Lying, its sequel One of Us Is Next, Two Can Keep a Secret and The Cousins. Her work has been published in more than 40 languages. To learn more about Karen and her books, visit karenmcmanus.com, or follow @writerkmc on Twitter and Instagram.

Praise for Two Can Keep a Secret:

A BuzzFeed Best YA Book of the Year

"It’s even better than what came before: more exciting, with richer characters and a stronger final-act twist. . . .  This is a murder-mystery, and a damn good one, the town of Echo Ridge steeped in an irresistible menace, the questions at the heart of the novel turning darker and deeper with each new revelation. That’s what should rightly make this another smash best-seller." —EW

“You won't be able to put [it] down.”—Cosmopolitan.com

"A must-read YA thriller if you love Riverdale and Sharp Objects." —Bustle

"Tightly knit and well-placed plot elements, along with the development of Ellery and Malcolm’s relationship, keep pages turning until the revelation of the murderer’s identity and motivations, as well as some other secrets that turn out satisfyingly well." —Bulletin

"McManus follows up her smash hit debut, One of Us Is Lying, with another twisted mystery...[that will have readers] speeding their way to the end." —Booklist

More Praise for Karen McManus's One of Us Is Lying:

"You'll tear through this juicy, super-fun (if murder can ever be fun?) thriller." --Bustle

"Readers will have a hard time putting this clever page-turner down." —BookPage.com

“An addictive, devour-in-one-sitting thriller with so many twists and turns you'll be wondering until the very end: Who really killed Simon?”—Kara Thomas, author of The Darkest Corners and Little Monsters

"This fast-paced blend of Gossip Girl, Pretty Little Liars, and classic John Hughes will leave readers racing to the finish as the try to unravel the mystery on their own." —Kirkus Reviews

"One of Us Is Lying is flat-out addictive...[McManus] weaves an authentic, suspenseful mystery that readers can imagine taking place at their very own high school.” —RT Book Reviews

"A smart, twisted, and unpredictable YA mystery that will have readers guessing until the very end." —SLJ

"An engaging, enticing look at the pressures of high school and the things that cause a person to lose control." —Booklist