Into the Black Nowhere: An UNSUB Novel (CD-Audio) 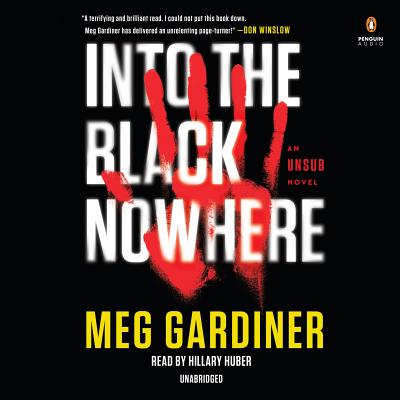 By Meg Gardiner, Hillary Huber (Read by)
Unavailable. Orders will be auto-cancelled.

In southern Texas, on Saturday nights, women are disappearing. One vanishes from a movie theater. Another, from her car at a stoplight. A mother is ripped from her home while checking on her baby. Rookie FBI agent Caitlin Hendrix, newly assigned to the FBI's elite Behavioral Analysis Unit, fears that a serial killer is roaming the dark roads outside Austin.

Caitlin's unit discovers the first victim's body in the woods, laid out in a bloodstained white baby-doll nightgown. A second victim in a white nightie lies deeper in the forest's darkness. Around the bodies, Polaroid photos are stuck in the earth like headstones, picturing other women with their wrists slashed. The women in the woods are not the killer's first victims, nor are they likely to be his last.

To track the UNSUB, Caitlin must get inside his mind; he is a confident, meticulous killer, capable of charming his victims until their guard is down, snatching them in plain sight. He then plays out a twisted fantasy—turning them into dolls for him to possess, control, and ultimately destroy. Caitlin's profile leads the FBI to focus on one man: a charismatic, successful professional who easily gains people's trust. But can they apprehend him before it's too late? As Saturday night approaches, Caitlin and the FBI enter a desperate game of cat and mouse, racing to capture the cunning predator before he claims his next victim.

MEG GARDINER is the author of thirteen critically acclaimed novels, including UNSUB and China Lake, which won the Edgar Award. Originally from Santa Barbara, California, she lives in Austin, Texas.

Praise for Into the Black Nowhere

“Excellent. You know the drill, bookstore near you. Buy now, thank me later.”—Stephen King

“Chilling new cases to dive into on a long winter’s night.”—Bookpage

“With a plot that moves at a breathless pace and a heroine with a history of her own issues, Gardiner’s gripping nail-biter will please fans of Alex Kava, Tami Hoag and even Thomas Harris’ Hannibal Lechter novels. Be ready for requests.”—Booklist

One of “The Most Anticipated Crime, Mystery, and Thriller Titles of 2018...a fast paced thriller that also functions as a travel guide, with mouth-watering descriptions of taco stands providing relief from stomach-churning crime scenes.”—LitHub

“Gardiner once again does serial killing to a turn.”—Kirkus Reviews

“Excellent...Gardiner expertly integrates the FBI science of profiling with a suspenseful plot and believable characters. It’s no wonder a TV drama based on this series is in the works at CBS.”—Publishers Weekly

“Riveting...[Caitlin Hendrix] is a strong female character who is never the victim, and that is rare in this genre.”—Associated Press

“Gardiner skillfully builds tension as the pace accelerates toward the most dramatic, exhausting, and satisfying ending I’ve read in quite some time. Woman power, y’all.”—Lone Star Literary Life

“Gardiner, who has 13 well-received titles to her name, including Edgar Award winner China Lake, has turned in another winner with Into the Black Nowhere. Crime-thriller fans appreciate her compelling, well-developed characters—both good and bad- her sense of plot, her master of heart-stopping twists, and her pace, which is TV-ready, as her recent accomplishment shows, combine to create a rollercoaster of a reading ride.”—The Florida Times-Union