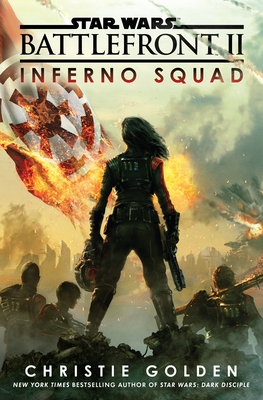 After the humiliating theft of the Death Star plans and the destruction of the battle station, the Empire is on the defensive. But not for long. In retaliation, the elite Imperial soldiers of Inferno Squad have been called in for the crucial mission of infiltrating and eliminating the Partisans—the rebel faction once led by notorious Republic freedom fighter Saw Gerrera.

Following the death of their leader, the Partisans have carried on his extremist legacy, determined to thwart the Empire—no matter the cost. Now Inferno Squad must prove its status as the best of the best and take down the Partisans from within. But the growing threat of being discovered in their enemy’s midst turns an already dangerous operation into a do-or-die acid test they dare not fail. To protect and preserve the Empire, to what lengths will Inferno Squad go . . . and how far beyond them?

The Rebellion may have heroes like Jyn Erso and Luke Skywalker. But the Empire has Inferno Squad.

“Wow . . . This book is a must-read. Christie Golden just knocked it out of the park!”—The Geek’s Attic

Christie Golden is the award-winning New York Times bestselling author of nearly sixty books and more than a dozen short stories in the fields of fantasy, science fiction, and horror. Her media tie-in works include her first novel, Vampire of the Mists, which launched TSR’s game line; more than a dozen Star Trek novels; the Fate of the Jedi novels Omen, Allies, and Ascension as well as standalone novels Dark Disciple and Battlefront II: Inferno Squad. For Blizzard Entertainment, she's contributed five StarCraft novels, including the Dark Templar trilogy, and the Warcraft/World of Warcraft books Lord of the Clans, Rise of the Horde, Arthas: Rise of the Lich King, War Crimes, Before the Storm and Exploring Azeroth: Eastern Kingdoms. In 2017, she was awarded the International Association of Media Tie-in Writers Faust Award and named a Grandmaster in recognition of thirty years of writing. She currently works full-time for Blizzard Entertainment, where she frequents Azeroth on a regular basis.

“Wow . . . This book is a must-read. Christie Golden just knocked it out of the park!”—The Geek’s Attic