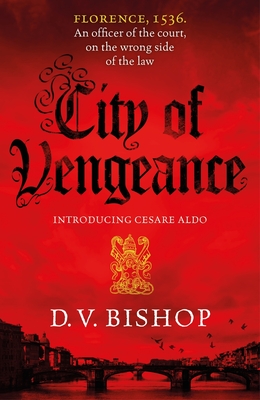 Florence. Winter, 1536. A prominent Jewish moneylender is murdered in his home, a death with wide implications in a city powered by immense wealth.

Cesare Aldo, a former soldier and now an officer of the Renaissance city’s most feared criminal court, is given four days to solve the murder: catch the killer before the feast of Epiphany – or suffer the consequences.

During his investigations, Aldo uncovers a plot to overthrow the volatile ruler of Florence, Alessandro de’ Medici. If the Duke falls, it will endanger the whole city. But a rival officer of the court is determined to expose details about Aldo’s private life that could lead to his ruin. Can Aldo stop the conspiracy before anyone else dies, or will his own secrets destroy him first?

D. V. Bishop is an award-winning screenwriter and TV dramatist. His love for the city of Florence and the Renaissance period meant there could be only one setting for his crime fiction debut. City of Vengeance won the Pitch Perfect competition at Bloody Scotland 2018, and he was awarded a Robert Louis Stevenson Fellowship by the Scottish Book Trust while writing the novel. When not busy being program leader for creative writing at Edinburgh Napier University, he plans his next research trip to Florence.