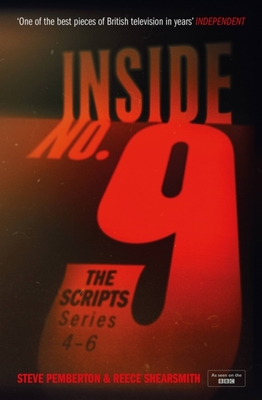 An anthology of darkly comic twisted tales by Steve Pemberton and Reece Shearsmith, each one taking place behind a door marked 'number 9'. Each 30-minute episode is a self-contained story with new characters and a new setting, and all star at least one (usually both) of Pemberton and Shearsmith. It is a beautifully written series, some stories comic, some tragic, all highly original and inventive. Each episode also has specially commissioned poster artwork to accompany it. As well as Steve and Reece it has featured guest appearances from hundreds of well-known actors including Jack Whitehall, Peter Kay, Sheridan Smith, Gemma Arterton, Keeley Hawes, Alison Steadman, Conleth Hill, and David Morrissey.

Collected are the scripts from every episode from series 1 - 3, with a beautiful slipcase collector's edition to follow.

Steve Pemberton (Author)
Steve Pemberton is the award-winning actor, writer and co-creator of Inside No. 9, The League of Gentlemen and Psychoville. As an actor, Pemberton's recent credits include Killing Eve, Britannia, Good Omens, The Interrogation of Tony Martin and Happy Valley. He also adapted and starred in Mapp and Lucia, the widely acclaimed BBC mini-series, from the novels of E F Benson. Other writing credits include Les Dawson's Parisienne Adventure for Sky, and episodes of Whitechapel and Benidorm for ITV.

Reece Shearsmith (Author)
Reece Shearsmith is the award-winning actor, writer and co-creator of The League of Gentlemen. He has also starred in numerous other TV comedies, including Car Share alongside Peter Kay, Mid Morning Matters with Steve Coogan, Catterick with Reeves and Mortimer and Spaced with Simon Pegg. Reece also has an illustrious career on stage, starring in new plays by Steven Moffat (The Unfriend at the Minerva Theatre in Colchester), Lucy Prebble (A Very Expensive Poison at the Old Vic) and Martin McDonagh (Hangmen at the Royal Court).