The Night Before Christmas (Hardcover) 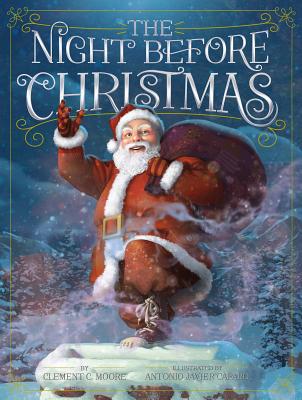 The original tale of The Night Before Christmas by Clement C. Moore is now accompanied by enchanting illustrations from Antonio Caparo in this festive holiday picture book.

’Twas the night before Christmas, when all through the house
Not a creature was stirring, not even a mouse…

Since it was first published nearly 200 years ago “The Night Before Christmas” has enchanted readers young and old with the story of St. Nicholas landing on a snowy roof, climbing down the chimney, and filling all the stockings with gifts before riding off in his sleigh, wishing “Happy Christmas to all, and to all a good night!”

This classic poem is now accompanied by stunning, richly detailed illustrations from Antonio Caparo, illustrator of Rudolph the Red-Nosed Reindeer and Rudolph Shines Again. This beautiful picture book is the perfect Christmas gift.

Clement C. Moore was born in in New York City in 1779. During his lifetime, he wrote in a variety of forms, including biography, translation, fiction, and poetry. He is perhaps most famous for his poem, “A Visit from St. Nicholas,” which was first published anonymously in 1823, and later became known as “The Night Before Christmas.” The first few lines of this poem are some of the best-known verses of American literature and Moore’s descriptions of Santa Claus have contributed significantly to our conception of him. Moore died in 1863, but his legacy will live on forever.

Antonio Javier Caparo is a Cuban-born illustrator and designer. Although much of his early career was spent in graphic design, his passion for animation and comics led him to devote himself to illustration—both traditional and digital. He has been published around the world and has won numerous awards in multiple countries. He lives in Quebec, Canada.